Commodity prices drifted higher last week as reported by our Materials Price Index (MPI). Positive macro signals from the Chinese economy, such as a strong industrial production growth (8.4% y/y) and stable first quarter real GDP growth (6.4% y/y), hinted at improving demand for industrial materials, reinforcing support the complex has received in recent weeks from the prospect of meaningful stimuli in China. The combined effect of these positive forces lifted the MPI 0.5%. 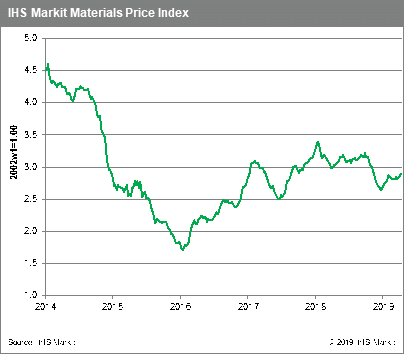 Although most MPI components showed small gains last week, non-ferrous metals showed some mid-week volatility, with copper moving above the key resistance level of $6,600 /t for the first time in nine months before retreating at week's end. Copper did post a gain for the week, though it was only non-ferrous metal to do so. Ferrous prices rose a fractional 0.1%, despite reports that Vale would be reopening the Brucutu mine in Southern Brazil following its closure for safety reasons in February. Prices dipped initially on the news, but restocking demand in China took iron ore prices back above $94 /t. Prices for crude oil also moved up 0.1% during a mixed week that saw US production rise to 12.2 MMb/d in Q1 from 11.7 in 2018 Q4. Counterbalancing data on higher US production is the coup in Sudan and continued fighting in Libya, which are adding greater uncertainty to market supply. Chemicals prices moved up 2.1% as planned capacity closures continue to favour producers in the US.

The sideways pattern in commodity markets displayed over the past two months looks set to continue through year end. Global manufacturing appears lackluster, with weak order books suggesting no quick improvement in production.