Our Materials Price Index (MPI) fell 0.4% last week, with seven of the index's ten sub-components falling. Following the extreme volatility in commodity markets in the aftermath of Russia's invasion of Ukraine, prices have been more settled in the last three weeks. That said, commodity prices remain near their all-time high established in early March. 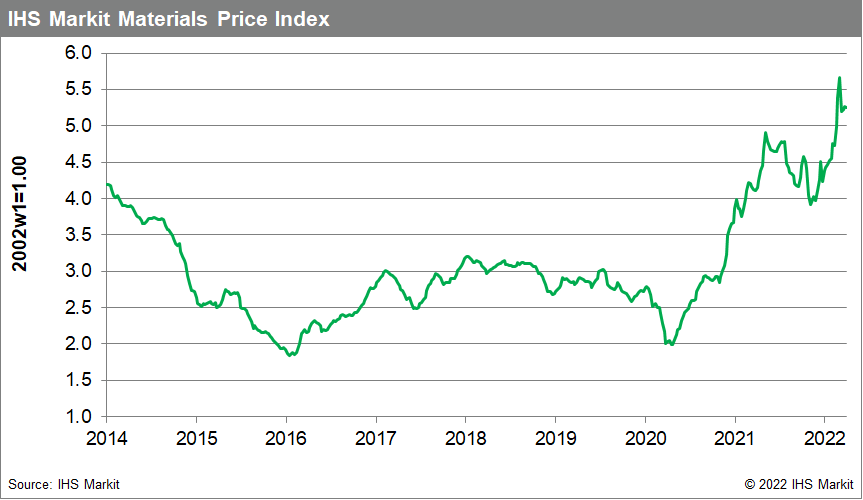 Declining energy prices were the main reason for the decrease in the MPI last week. The energy sub-component dropped 5.9% as both natural gas and oil prices fell. UK spot landed prices of liquefied natural gas (LNG) dropped to $30MMBtu from $40 the previous week. Asian prices also pared back to $33/MMBtu, down $4 in one week. The main reason for the price decline was improving market sentiment after it became clear that Russian gas flows were continuing despite an ongoing payment dispute between European countries and Russia. This optimism did not stretch to the US, however, as Henry Hub prices increased 12%, their third consecutive weekly rise. Lower domestic production and increased US exports to Europe led to supply concerns. This coincided with a severe weather warning for parts of the United States, which is expected to lead to a spike in demand. Global oil prices continued to fall, declining 5% last week, after the International Energy Agency (IEA) announced plans to release an additional 60 million barrels of crude oil to the market. This followed the commitment by the United States to release 180 million barrels from its strategic reserve over the next six months.

Last week's decline in commodity prices chimed with general market softness across asset classes. This was a reaction to growing COVID-related shutdowns in China and the US Federal Reserve plans to rapidly reduce its balance sheet to tackle high inflation rates. Markets are now expecting an even more aggressive tightening of US monetary policy, which damaged market sentiment. In Europe, the prospect of a tight French Presidential race added to the gloomy mood among traders. Nevertheless, commodity markets remain precariously poised. The disruption to Russian trade flows still signals a deterioration in measures of vendor performance in the months ahead. After showing signs of improving late in 2021, delivery times, backlogs and reported shortages all look to increase this summer. The risk for policymakers is that cost pressures will continue to remain strong and embed expectations of sustained higher price levels, making the job of taming consumer inflation all the harder.