Our Materials Price Index (MPI) fell 0.4% last week, the fifth consecutive weekly drop. The decline was not widespread, with only four out of the ten MPI sub-components down. This latest move means commodity prices have fallen 9.4% in August although prices collectively are still at an eight-year high. 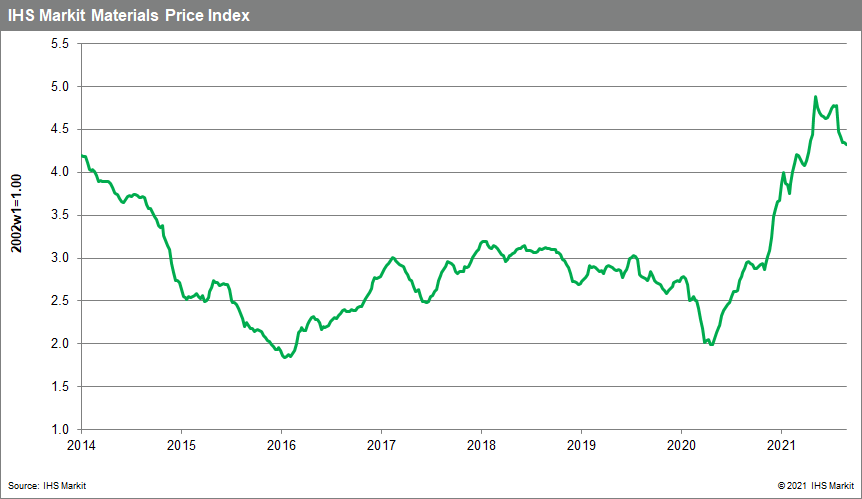 Steel making raw materials were again the main contributor to the MPI's decline last week. Our ferrous sub-index was down 5.5% as both iron ore and scrap steel prices fell. Iron ore prices dropped to $140 a tonne last week, a nine-month low, after peaking at $219 in July. Scrap prices dipped to $450 a tonne, down from $518 in late May. The reason for the price drop is linked to uncertainty over future Chinese steel consumption. Authorities in mainland China have asked steel mills to limit production to help meet carbon emission targets and are threatening punishment for any noncompliance. This intervention has reduced demand for iron ore and scrap steel, sending prices significantly lower. Despite the continuing correction in iron ore prices, there was evidence of upward pricing pressure in other commodity markets. Energy prices are notably strong with UK spot landed prices of Liquefied Natural Gas (LNG) climbing to $17/mmbtu last week. This is the highest price ever recorded; current prices in Europe are four times higher than this time last year. A severe winter had already depleted European stocks and supply has faced significant challenges since. A drop in Russian imports, and lower oil production in the North Sea (natural gas is often a crude oil byproduct) has caused a supply crunch which is likely to last through the winter. North American chemical prices also soared last week as Hurricane Ida hit the US Gulf Coast. US ethylene prices climbed 23% last week after hurricane disruption resulted in around 16% of production taken offline in Louisiana.

While the MPI declined last week, markets remained upbeat. Weaker than expected US payroll data was viewed as support for the dovish comments voiced at the US Federal Reserve's annual Jackson Hole meeting the previous week. Investors, based on their behavior, seem confident that the current burst of inflation is transitory and a that more aggressive tightening in policy is therefore not likely soon. We agree with this assessment in the near term. The key, however, remains what happens on the supply-side of markets. The correction in commodity prices since the start of the second quarter has resulted primarily from softness in demand, not any easing of the disruptions and bottlenecks that have been plaguing supply chains. Until these are resolved, tight supply conditions in goods markets will continue to keep upward pressure on prices.