Our Materials Price Index (MPI) declined 1.4% last week, following a 2.5% decrease the previous week. Although commodity markets have become choppier recently, declines were not widespread last week - five of the MPI's ten subcomponents fell. Commodity prices as measured by the MPI are still up 22.3% since the beginning of 2021. 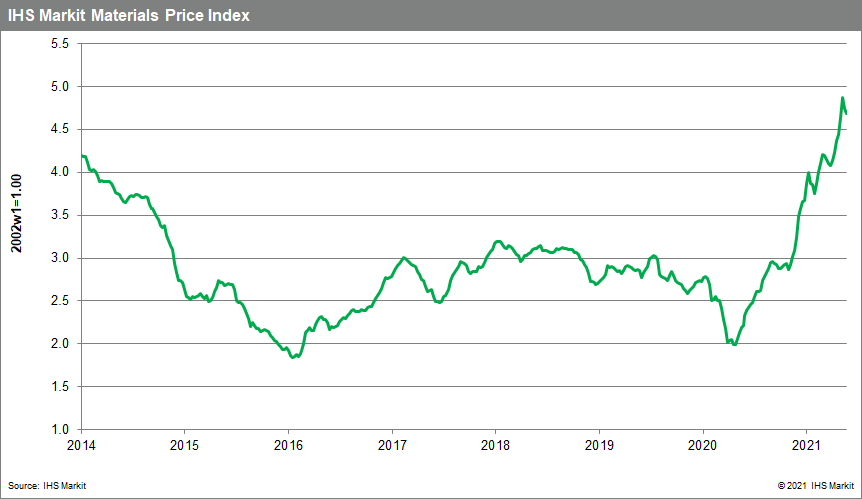 The largest declines were in chemicals and ferrous metals. Global chemical prices fell 5% as an improving supply picture improved market balances. Benzene markets globally witnessed the largest declines, with European prices down more than 20%. This followed the return of a major refinery in the Netherlands, which had been offline since the end of February. Improved supply in Europe lessened export opportunities for US producers, causing a similar price correction for North America. The steel making raw materials sub-index declined 2% last week as iron ore prices continued to retreat from recent historic highs. Markets are reacting to recent announcements from the Chinese government signaling its intention to intervene to tackle soaring prices. Elements of the MPI showed strength last week including energy with our sub-index up 6.3% as global coal prices rallied. Strong demand and tight supply continue to support prices in coal markets.

Although commodity markets remain strong the overtly bullish sentiment has begun to ebb. The optimism that has characterized markets since last November is being tested by the appearance of consumer price inflation in official statistics. Investor sentiment remains generally positive, though concerns that policymakers may begin to reduce stimulus sooner than previously expected have started to become a concern. More important for physical markets, high commodity prices are beginning to encounter resistance from buyers. If supply conditions improve - as expected -- these factors will combine to end the now-13-month surge in commodity prices.