Our Materials Price Index (MPI) increased 0.8% last week, continuing a strong start to the year. Since the end of November, commodity markets have seen extraordinary volatility while rising a cumulative 12%. Even so, the MPI still remains 9% below its May 2021 peak. 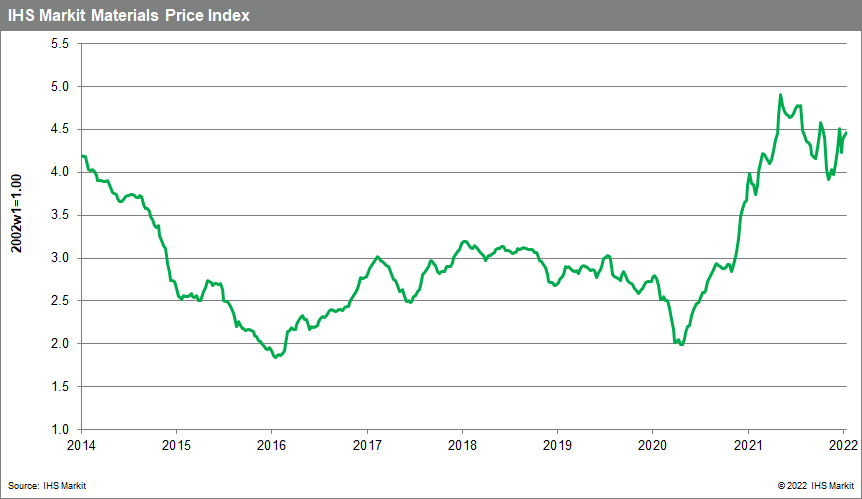 Higher oil prices were the main reason for last week's increase. Our energy sub-index was up 0.7% as Brent Crude, the international oil benchmark, reached $88.55 a barrel. This is its highest level since October 2014 and sparked speculation that oil could rise above $100 a barrel once more. Prices have increased 13.4% in the last four weeks on market expectations that demand growth will outstrip increases in supply this year. The recent drone attack on the United Arab Emirates raised concerns over future supply sparking the latest price rise. The rise in oil prices also meant higher feedstock costs for global chemicals; the MPI's chemical sub-index is reflecting these conditions and rose 1.5% last week, its sixth consecutive increase.

In contrast to commodity markets, global equity markets for the most part suffered losses last week as they confront prospects for tighter monetary policies and slower growth. The expectation to this general rule was mainland Chinese stocks, which advanced in the belief that policymakers there will provide additional stimulus to help offset softening growth. Recent strength in commodity prices in part reflects this same belief. Interest rate spreads between low- and high-quality debt also remains relatively narrow, suggesting markets do retain an appetite for risk. It remains to be seen, however, whether commodity markets will be able to withstand the twin headwinds of waning fiscal stimulus and tight monetary policies in most of the rest of the world as 2022 progresses.