Our Materials Price Index (MPI) fell 0.2% last week, its sixth consecutive decline. Declines were not universal with six out of the MPI's ten subcomponents down. Notwithstanding their recent consolidation, commodity prices as measured by the MPI are still up 20% since the beginning of 2021. 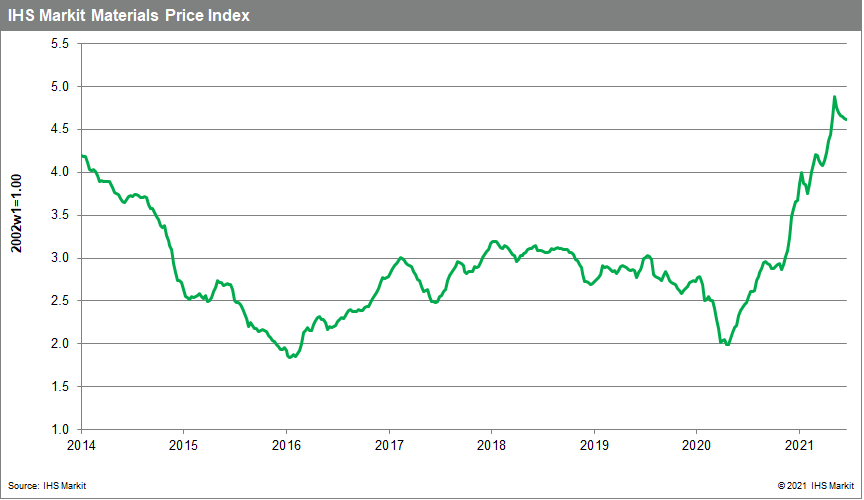 Industrial metals led the decline last week with both the ferrous and nonferrous metal sub-indexes down. Steel making raw material prices fell 0.3% as the price of iron ore dropped to $173 per tonne having been as high as $230 last month. The decrease came after the National Development and Reform Commission vowed to intervene to curb speculation in the iron ore market. Promising to "severely punish" any wrongdoing, it is a further signal that the Chinese authorities are prepared to take action to curb recent price rises. The nonferrous sub-index declined 2.5% with sizable drops in copper, aluminum, and zinc. The declines followed the announcement of the first metals auction by the Chinese National Food and Strategic Reserves Administration. It confirmed it would auction 20,000 tonnes of copper, 30,000 tonnes of zinc, and 50,000 tonnes of aluminum on July 5-6. Although a small fraction of the amount used each month in mainland China, it still had the impact of reducing prices. Lumber prices continued to fall with the sub-index down 7.1% last week. This latest move means lumber prices have fallen 35% in the last month with additional declines expected as buyers resist current elevated price levels.

Equity markets recovered from the volatility of the previous week as President Biden reached a tentative agreement for US infrastructure spending. Although the deal was worth less than initially proposed, it boosted investor confidence in the growth prospects of the US economy. And although the latest core personal consumption expenditure data showed the largest increase since 1992 the bond market seems to accept that inflation is likely to be transitory, in line with the US Federal Reserve's stance. Commodity price movements are starting to reinforce this view with a combination of factors -- improved supply conditions, buyer resistance, and less bullish investor sentiment - increasingly pointing to a rally that has run its course. Expect prices to collectively record a modest decline over the rest of the year. Semiconductors are likely an exception while cracks in finished steel prices or the inability of oil prices to push above $80/bbl will be an affirmation that the year-long rebound in commodities is indeed over.