Our Materials Price Index (MPI) fell 1.5% last week, its sixth straight decline, despite a flurry of bullish news and data releases. The good news came from a number of sources last week: the US Federal Reserve cut interest rates again, the October Chinese manufacturing PMI posted its best reading in over two years and President Trump said he would press ahead with plans to sign a 'limited trade truce' with President Xi at a new venue after the cancellation of December's APAC summit in Chile. Still commodity markets retreated on continuing worry about demand growth, with seven of the MPI's ten sub-components falling. 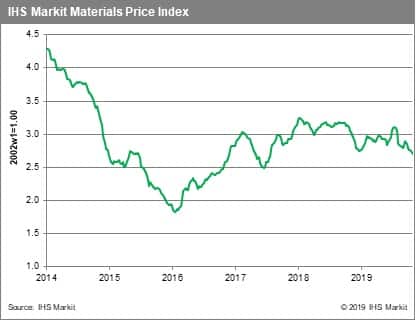 The chemicals price index led the MPI lower, falling 2.7%, with propylene, benzene and ethylene prices all declining. The MPI's chemical index is now at its lowest level since February 2016. Ferrous prices also softened 2.6%, with iron ore futures falling 8.0% mid-week to around $83 /t. Steel markets in China market look increasingly weak - the top-line steel industry related PMI in China fell to a 46-month low in October with new steel production cuts in Shandong and Shanxi provinces also announced. Energy prices fell 0.4% last week. Oil was steady, but LNG prices showed volatility in the US and Asia. Asian prices fell 7.7%, as floating storage began to offload volumes into China and Japan, easing supply. In contrast, US prices shot up 16.8% to a seven-month high after cold weather forecasts for the coming weeks spooked the market. Non-ferrous metals were an outlier last week, rising 0.9% on optimism surrounding the 'limited trade truce', the manufacturing PMI surprise and continuing unrest in key copper producer Chile.

The key question for commodity markets is whether the cumulative effect of the stimulus being deployed globally with be enough to at least stabilize conditions in manufacturing, the point of weakness in the global economy at the moment. The September and October PMI data hint that manufacturing may be at or nearing a bottom. Data for November and December will determine whether the last two months of PMI data were just a pause in a downtrend or, in fact, a turning point.