Our Materials Price Index (MPI) increased 3.8% last week, building on a 3.3% increase the week before. Price increases were broad with nine of the ten MPI sub-components increasing. Despite last week's rise, commodity prices have dropped 7% since mid-October and 13% since their May peak. 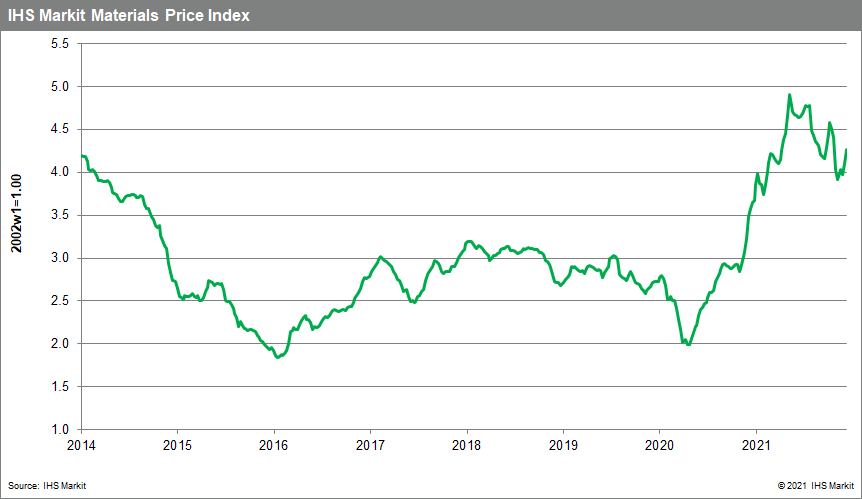 Energy prices were the largest contributor once more last week. Our energy sub-index was up 11.8%, as natural gas and coal prices surged. UK spot landed prices of liquefied natural gas (LNG) reached $41/MMBtu, the highest ever recorded. This was up from $34 the previous week with prices now five times higher than a year ago. Asian prices also broke records reaching $41.80/MMBtu, a 15% gain for the week. With inventory levels in Europe already low, political tension between Russia and Ukraine added a further risk to supply and helped spark prices. The onset of winter has compounded problems by increasing demand for natural gas. Elevated gas prices are likely to last well into the summer. Higher natural gas prices also boosted coal prices as electric utilities adjusted their generation mix to reduce costs. Global coal prices, as measured by the MPI, have increased by more than 20% in the past two weeks.

Last week's jump in the MPI coincides with central banks accelerating action to tackle high prices. The Bank of England raised interest rates for the first time in three years, joining Russia, Mexico and five others in raising policy rates last week. The latest Federal Reserve update showed that a plurality of the FOMC (10 of 18) expects that 3 rate increases next year will be appropriate, while the European Central Bank announced it would end its Quantitative Easing program in March 2022. Despite the latest moves by central banks around the world, there are signs that price pressure from commodities is easing. Notwithstanding last week's increase in the MPI, commodity prices appear to have peaked back in the second quarter. With goods markets benefiting from lower commodity prices and better logistics services, and with wage pressures not expected to be sustained, year-on-year top-line inflation rates are expected to slow by the end of 2022. A definitive change in goods market should be apparent even sooner, perhaps as early as the second quarter, providing guarded optimism for the new year.