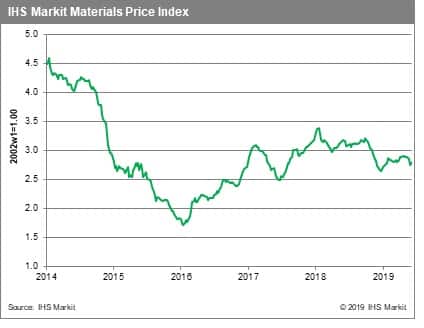 Although global steel prices have been weak in June, news that Australian iron ore shipments would fall in July (an annual event), spooked markets, pushing up ore prices. Iron ore was also helped by May data from China showing strong real estate investment and good project start-ups even though China's broader industrial production index in May grew at its slowest pace since 1992. The effect was enough to raise the MPI's ferrous metals index 4.3%. Chemicals prices also rose 2.0%, rebounding after falling in step with oil prices in recent weeks. Lumber was another big mover this past week rising 14.2% after Canfor's major curtailment announcement sparked buying. Rubber prices also saw a bounce, rising 6.4%. Rubber prices have been staging a modest rally since late 2018 because of managed exports by large producers, though last week's move keyed off reports of weak May production in India. In a sign of how much energy markets have changed in ten years; oil prices fell 0.2% last week. Despite the tanker attacks in the Gulf of Oman, the market chose to focus not on the threat to supply, but on the prospects for further downgrades to consumption growth.

Notwithstanding last week's rise in the MPI, fears of weakening demand growth and excess supplies have changed the mood in commodity markets since early in the first quarter. The optimism in markets in the aftermath of the US Federal Reserve's shift to a more accommodative stance has dissipated with the breakdown in US-China trade negotiations. Absent a breakthrough at the upcoming G-20 talks in Osaka, poor sentiment will keep commodity prices under pressure.