Commodity prices, as measured by our Materials Price Index (MPI), eased back 0.2% last week, in a collectively quiet week after a huge revised 4.6% gain during the first week in July. Technically, seven of the MPI's ten components recorded drops, though in practical sense, four showed no change, either increasing or decreasing by 0.1 percentage point or less. 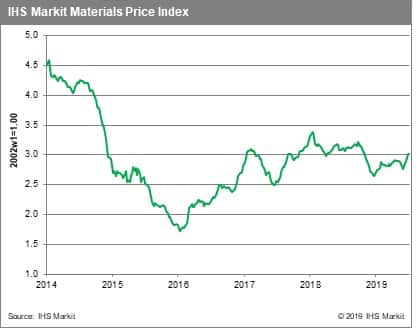 After a small correction in early July, oil prices extended June's gains by rising 3.3%. Brent crude moved above $66 /bbl as a larger than expected decline in US crude inventories and the UK Navy's intervention in the Persian Gulf rattled oil markets. Prices have also been buoyed by reports that the US is considering letting Venezuelan waivers expire for US companies. Freight pricing was the only other component of the MPI to show more than a fractional rise last week. Better bulk freight demand out of Brazil and Australia took prices up 6.9%. Bulk charter rates are now 20.5% higher than January before the Vale dam accident. Chemicals prices retreated 3.4% after jumping 12.4% the previous week. Ethylene prices fell 17.5%, some correction had been expected after prices surged 46% in early July. Lumber also fell 6.1% last week, also retreating after a 26% rise in June on capacity closures. Ferrous prices moved 0.1% lower as the effect of an investigation into iron ore pricing in China checked ore prices.

Equity markets responded positively to Fed Chairman Powell's statements to Congress last week, which seemed to confirm a pending US interest rate cut. Citing risks to the US economy from 'major foreign economies', (supported by the release of China's slowest growth in 30 years), Chairman Powell built a case for a July rate cut, without committing to any timeframe. Commodities did not draw much additional strength from Chairman Powell's testimony, having already priced in such a move. Still, it will be interesting to see how commodity markets move on the fact rather than the rumor of a rate cut should one materialize later this month.