Weekly Pricing Pulse: Commodities fail to look on the bright-side 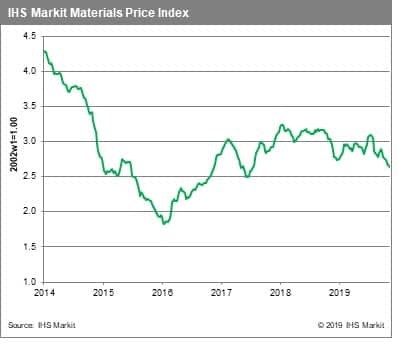 Energy prices fell 1.2% last week mainly driven by a 3.3% drop in natural gas prices on the back of higher inventories in Japan and plentiful supply in other regions. Coal prices also fell 3.3% and are near a three-year low. A ban on imported coal into China and strong supply out of Australia have been undercutting prices. Oil ticked up 0.6% on trade-talk positivity but remained subdued on OPEC oversupply warnings and persistent worry over weak liquids demand growth. Non-ferrous metals fell 2.4% on an uptick in LME inventories and weaker than expected October Chinese industrial production report. Ferrous prices also fell 0.6% on the weak data from China. Freight prices dropped 5.2% for an eighth week as capesize availability improved further. Chemicals dipped 0.5% mainly because of a 1.7% fall in propylene prices stemming from a 5.7% fall in US propylene prices.

The mood in commodity markets remains downbeat, even as equity prices increase and bond yields have begun to rise. While fundamentals have been slowly tightening in a number of industries, commodity markets remained focussed on China, where fresh data has been discouraging. Markets are also becoming jaded about hints of progress in US-China trade talks. The net effect is a more jaundiced view of the near future. A change may be forthcoming, however, depending on the extent to which China implements production controls this winter. Authorities have set less stringent winter pollution cuts this year and noticeably have not issued specific requirements for mills or smelters. Shallower cuts, of course, would mean stronger demand this winter which, when combined with the targeted stimulus Chinese policymakers have been deploying, could spell some upside to prices in the short-term.