Our Materials Price Index (MPI) increased 1.6% last week, it's sixth gain in seven weeks. As has been the case for much of May's rebound, however, the rise was not broadly based: only five of the MPI's ten subcomponents rose, four fell and one stayed flat. Chemical prices were the driver behind last week's rise, increasing 8.0%. Excluding chemicals, the MPI would have fallen. 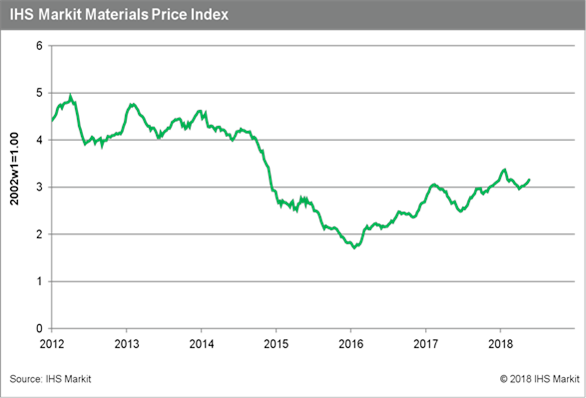 Ethylene prices surged last week, increasing over 16% as several steam crackers experienced outages, while reports surfaced that more units are about to go off-line. Propylene markets also experienced tightness last week, pushing prices higher; the Energy Information Agency reported that total inventories were at a five-year low for May. The rebound in chemical markets last week marked a stark contrast to conditions seen earlier this year. The question is whether chemical prices - along with the wider commodity complex - can sustain the strength of the last two months.

Recent macroeconomic data releases have shed light on this question, suggesting that pressures may be reaching a peak. The Eurozone PMI Composite Flash report showed that growth lost momentum in May, registering its weakest level in eighteen months. We also see some softness in the Chinese economy, as evidenced by a slowdown in industrial activity. In contrast, business activity in the United States remains robust; May's US PMI Composite Flash report jumped to 55.7, signaling a continued vigorous expansion. Strength in the US economy can present a double-edged sword to commodity prices, however; it will boost raw material demand, but will also act to strengthen the US dollar and provide support for the Federal Reserve's policy of steady, gradual interest rate increases. Thus, June's FOMC meeting looms large. An expected interest rate increase while bond markets remain unsettled due to Italian political turmoil promises volatility ahead.