Geopolitics has been a major theme of 2018, last week was no different. The week started with a massive one-day rout in oil prices as OPEC research poured cold-water over the demand outlook. Next, the first draft Brexit withdrawal agreement resulted in a number of high-profile resignations in the UK government. Finally, hopes of easing US-China trade tensions at the APEC meeting were dashed as the 21-member countries failed to issue a joint communiqué for the first time in its 29-year history. Our Material Price Index (MPI) fell -2.1% w/w, the eighth weekly fall in the last ten weeks. 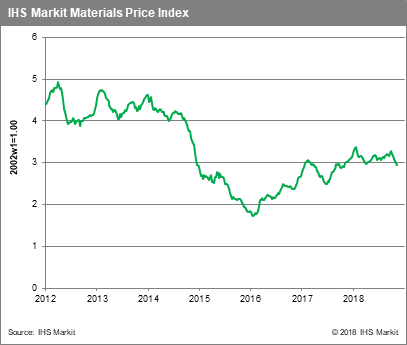 Eight of the ten MPI components fell last week, only Ferrous and Lumber showed positive moves. Ferrous prices ticked up due to strong scrap demand in the US as mills operate close to full capacity. Lumber, very volatile in recent weeks, rose 5.2% as it pared back Q3 losses. Oil was the major downside contributor falling -5.8% in total. Losses were however checked mid-week, following a projection that suggested OPEC may have to curb output to avoid a build in inventory. Bulk freight prices fell a massive -7.6% w/w, helped in part by oil losses but also due to bulk demand concerns as China officially kicked off winter production restrictions last week. Chemicals, rubber and fiber all dropped w/w in response to oil losses between -1.2% and -2%. 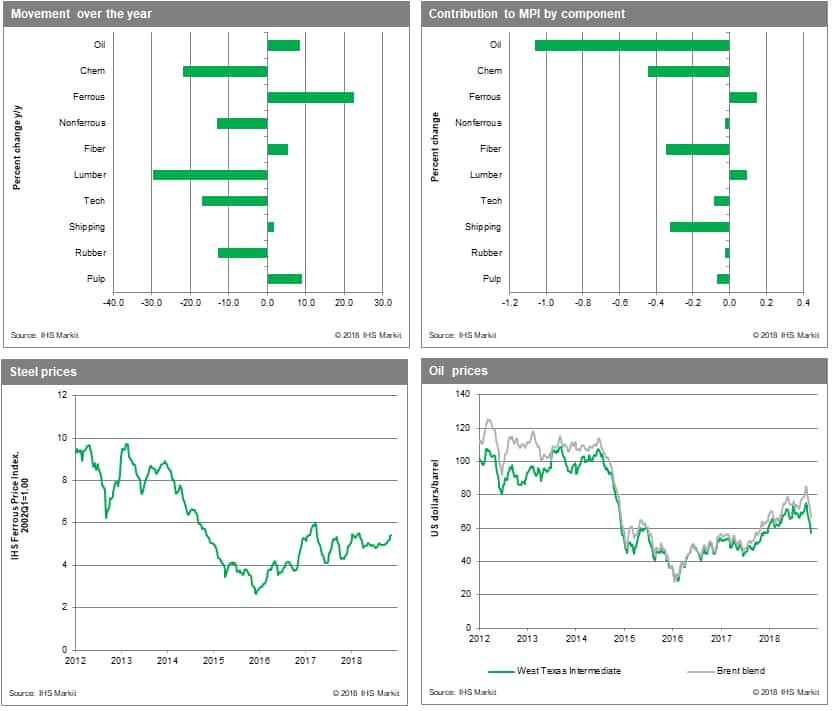 Large falls in the oil price this week gave a boost to emerging market currencies against the dollar. Net importers of crude, i.e. most of Asia, have seen currencies strengthen as Brent heads lower. The Rupee for example, hit hard by oil prices over $80 /bbl rose 0.9% vs. the USD mid-week, along with the Rupiah and other currencies. Further pressure was added to the dollar on Friday, as Fed Vice-Chairman Clarida reiterated that the US central bank would not speed up the pace of interest rate hikes, adding that current rates are near to neutral territory. The spreads between US 2-year and 10-year treasuries responded to the news, continuing their 2018 expansion and reaching the highest level since 2017 Q2.