Weekly Pricing Pulse: Another week of pain in commodity markets ends on a high

Despite improving sentiment in financial markets in the past week, commodity prices saw another decline with our Materials Price Index (MPI) dropping 2.1%, its eighth consecutive weekly retreat. Oil was again a major contributor, but the fall in prices was widespread - nine of the MPI's ten components declining. 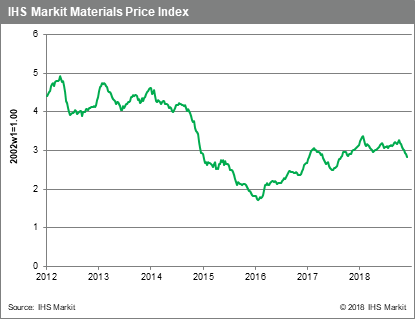 We have been predicting an increase in price volatility in recent weeks and last week saw exactly this. The rout in oil hit its ninth week, with prices falling another 5.8% as news of a large US inventory build hit an already skittish market. Oil is down some 30% since the start of October. The 25% rout in Chinese steel prices since August has turned margins negative, building pressure on the steel making raw materials sampled in the ferrous index, which fell 1.9% for the week. Non-ferrous prices also experienced volatility last week, contracting 1.4% before rebounding towards the end of the week on improving investor sentiment.

The week's developments were dominated by the G-20 summit in Argentina, with US-China trade discussions the focus of attention. Optimistic comments by both parties comforted markets by week's end, with Saturday's dinner producing at least a 90-day temporary truce the Sino-US trade war. The US will not boost tariffs to 25% on $200bn of Chinese goods on January 1. China for its part agreed certain concessions and promised to buy a 'very substantial' amount of agricultural, energy and industrial products. While the easing of trade tensions starts December off on a positive note, several key dates loom: the Brexit vote in Parliament on December 11 and the likely increase in US interest rates at the conclusion of the US Federal Reserve's Open Market Committee meeting on December 18 and 19. Expect another potentially volatile month in commodity markets.

The economy probably won't reach its pre-virus peak until 2022, primarily because the @LifeSciInsights believes an… https://t.co/6Wh75EAKRP

Our Chief US Economist @Newsweek "there is a very wide range of estimates about how strong the third quarter is goi… https://t.co/7ysxTfUPUY

Real consumer spending fell 7.3% in March in the most abrupt contraction on record, and retail sales declined in ca… https://t.co/eeyRV1LZiw