Commodity prices, as measured by our Materials Price Index (MPI), fell 4.7% last week, in yet another large broad-based retreat tied to the deepening global recession. The MPI is now down 22.1% since the start of the year with no sign of a bottom forming as the first quarter ends. 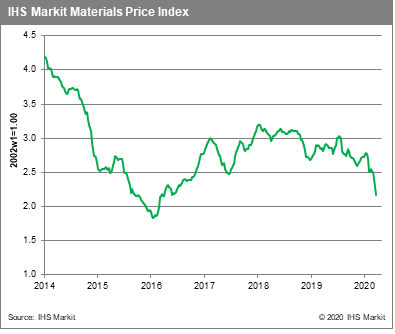 Nine of the MPI's ten sub-components declined last week. Chemicals, fiber, and rubber were the biggest movers, all falling more than 8% week-to-week. Benzene prices, which are heavily influenced by moves in crude oil, plunged 29%, driving a 10.9% decline in the MPI's chemicals sub-index. Oil prices fell another 9%, though nearly flat natural gas prices and an increase in coal prices meant the energy sub-index declined by only 2.0%. Both cotton and polyester prices fell by at least 8.0% to send the fiber sub-index sharply lower. Plunging car sales and worldwide cuts in auto production triggered an 8.5% decline in natural rubber prices even though a fungal disease threatens production in East Asia. Nonferrous metal prices declined 4.1% for the week with all six base metals in the sub-index falling. Lumber prices were the one exception to the rout in commodity prices last week, rising small 0.3% in a dead cat bounce -- prices had fallen more than 30% in the previous four weeks even with US mortgage rates at historic lows.

Data releases are now beginning to chronicle the severity of the downturn on a global scale evident in China during January and February. Outside of China, virtually every market in every country is now recording historic downturns. Even the reboot of Chinese economy is being hampered by waves of cancelled export orders as the pandemic brings the rest of the global economy to a halt. While production cuts now being made should begin to put a floor under prices 'soon', a substantial downside remains. The MPI, for instance, is still 18% above its previous cyclical low of January 2016, when conditions were not anywhere near as dire as they are now.

What does rising #interestrates in the US mean to the global #financialsector? Alyssa Grzelak explains the relation… https://t.co/02S8DjFWa3