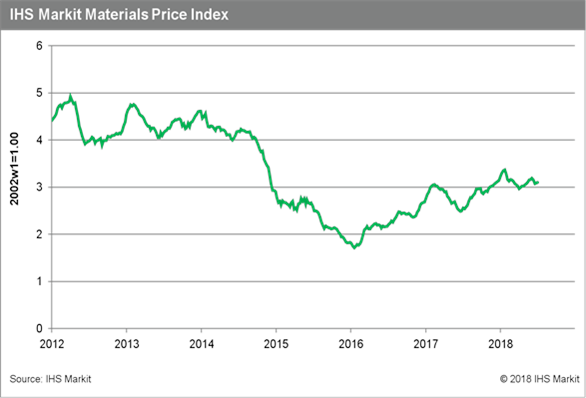 Several oil market developments have raised supply concerns, pushing prices higher over the past two weeks. Market watchers are becoming skeptical that increases in OPEC production will offset supply losses from Venezuela and Iran, raising concerns that a market deficit is ahead. Adding to the nervousness are ongoing supply outages in Canada and Libya, along with growing concerns over trade tensions between the United States and China. The strength in oil markets has pushed downstream to freight and chemical markets, as evidenced by their respective price movements last week. In addition to rising feedstock costs, demand conditions are also improving for chemicals; ethylene prices increased 9.9% last week as on ramping up derivatives production.

Macroeconomic data released last week continued to point to peaking global growth. The Eurozone PMI Manufacturing Index showed its weakest activity in eighteen months as export activity declined and business optimism sank. The Chinese General Services PMI report indicated a pickup in the service sector; however, we continue to see a slowdown in industrial activity. In the United States, the Bureau of Labor Statistics reported another month of brisk job growth, further bolstering the case for tighter monetary policy from the Fed. As global growth conditions peak, the commodity complex has limited growth potential. Once the rally in oil markets loses its steam, be on the lookout for a retreat in commodity prices.