Our Materials Price index (MPI) fell 1.6% last week, in a broad-based correction that saw all ten of the index's subcomponents declining. Optimism over the quick return of Saudi oil production meshed with disruptive political developments in both the UK and US and a lack of progress in US-China trade negotiations to send commodity prices lower across the week. 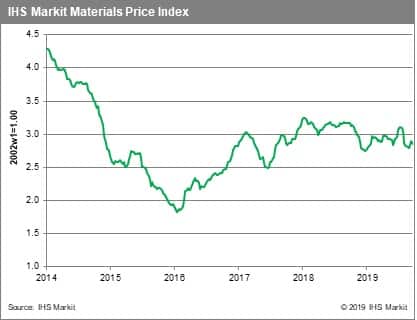 Energy, as was the case the week before last, was the driver behind the correction in commodity markets, with prices falling 2.8%. Oil fell 4.0%, correcting rapidly following the attacks at Abqaiq because of what appears to be the rapid return of production. Indeed, benchmark Brent blend is now close to its pre-attack prices. Gas, however, is a different story. While last week saw the composite gas price index in the MPI drop 3.8%, it is still up 12.7% since the attacks. Chemicals, relatively unmoved by the attacks, fell 2.4%. Ferrous prices dropped 1.0%, as recent iron ore restocking eased, taking prices to a three-week low of $89 per ton. Scrap prices also fell 2.0%, their seventh consecutive weekly decline, tied to weak steel export prices. Freight prices fell 1.7%, their first retreat in five weeks. Ocean going charter rates are entering a period of instability that will extend into 2020 as the market begins to deal with the new IMO regulations for low sulfur fuel.

Commodities remain plagued by the uncertainty hanging over markets and have traded basically sideways since April. Demand expectations have been steadily lowered since late last year, and correspondingly, the commodity price forecast has been revised down to where we now project a slight downward drift in prices through the end of next year. This said, there is some upside potential emerging in the outlook. Should some clarity appear in trade negotiations, there is the possibility a shift in sentiment could release pent up demand and trigger a snap back in prices in certain sectors.