Week Ahead Economic Preview: Week of 9 May 2022

Inflation data will be the key focus in the coming week with figures due from both the US and China for April. A series of Fed appearances will also be anticipated following the May Fed FOMC meeting, as will US consumer sentiment data. Meanwhile China releases a series of data including trade data against the backdrop of lingering COVID-19 disruptions. The UK's March GDP data and eurozone industrial production figures are also lined up in the week ahead.

US equities rallied following the May Fed FOMC meeting this week, whereby the Fed executed the biggest interest rate hike in 22 years. The rally represented a sigh of relief from both the avoidance of a potentially bigger May hike of 75 basis points (bps) and Fed Chair Jerome Powell's reassurance that they are not considering 75bps hikes at upcoming meetings. That said, the Fed remains committed to curbing inflation and the latest PMI data suggested that price pressures in the US private sector further intensified in April. As such, next week's CPI and PPI releases for April will be in focus with any indications of larger-than-expected price increases potentially ones to spook the market. Comments from Fed speakers will also be scrutinised in the coming week for any suggestions that the Fed may hike more than the 25bps currently priced in by the market for the June meeting, and the extent to which policymakers can engineer a soft landing for the economy.

In APAC, a barrage of economic data will be due from China, with the focus on both the inflation figures and trade data. Recent COVID-19 social distancing measures in mainland China continued to severely dent economic growth according to the latest PMI figures. Indications of diverging trends for factory gate and consumer price inflation appeared to be the case for April, making this one to watch. Meanwhile trade data are likely to suggest persistent disruptions from the ongoing lockdown restrictions.

Finally, following the Fed, Bank Negara Malaysia (BNM) is expected to bring its overnight policy rate up by 25bps according to our forecast. A series of GDP and CPI data will also be released from Southeast Asian economies including Indonesia and the Philippines.

The past week has seen policy tightened by central banks in the US and UK as inflation continues to hit multi-decade highs. Recent PMI data showed official CPI inflation rates could yet rise further, after the April data showed a further acceleration in both costs and selling prices for goods and services around the world. New record selling prices increases were seen in the US, eurozone and UK. However, at the same time, the surveys showed the pace of global economic growth slowing amid the twin headwinds of the Ukraine-Russia war and new COVID-19 lockdowns in mainland China.

Central banks are therefore facing an unenviable task of controlling inflation while minimizing the damage to the economy from tighter policy, but it is evident from the latest PMI data that the risk of a global economic downturn in the coming months has risen. Risks are highest in Europe, but growth looks set to weaken further in all major developed economies: business optimism has slumped lower across the board and growth looks increasingly reliant on a post-lockdown rebound in spending on consumer services, which by definition will prove temporary. Higher interest rates will also not help alleviate inflation in the near-term, which is being driven by supply side factors and energy prices. If anything, higher borrowing costs will merely add to the cost of living crisis and subdue consumer spending further. Just how quickly growth slows will therefore be a key factor to assess in the next few months. 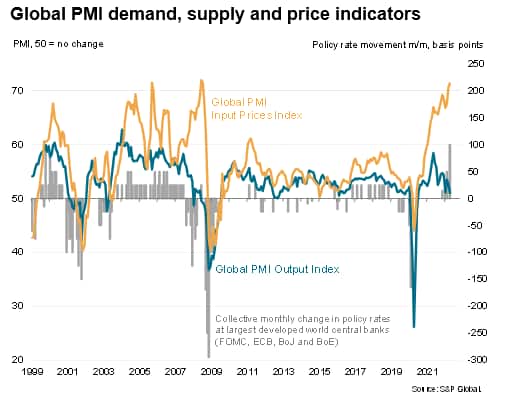 US April CPI and PPI figures will be in focus following the Fed FOMC meeting this week where emphasis on curbing inflation had been reiterated. While Fed Powell did push back against the likelihood of a larger 75 basis point increase in future meetings, the Fed chair nevertheless acknowledged that 'some pain' may be felt with the central bank keen to curb the surging inflation. The extent to which prices have surged in April will therefore be closely watched. The latest S&P Global US Composite PMI revealed that inflationary pressures further intensified in April.

In addition, a series of Fed appearances are lined up in the week ahead that would provide an update to the Fed's thoughts post the May FOMC meeting.

UK March and Q1 GDP data will be released, alongside quarterly growth data. According to the S&P Global / CIPS UK Composite PMI, private sector output growth quickened in March, supported by an acceleration in service sector growth as the manufacturing expansion slowed.

Separately, eurozone industrial production data for March will be released on Friday. This follows the S&P Global Eurozone Manufacturing PMI update which showed both the manufacturing PMI and output index falling to multi-month lows on the back of heightened geopolitical tensions and intensifying supply chain pressures.

In APAC, a series of China data releases, including trade, prices and money supply figures, will be updated for April.

Attention will be on China's inflation figures following price increases reported in the manufacturing sector, according to the Caixin Manufacturing PMI, suggesting higher factory gate inflation. On the other hand, services selling prices eased per the Caixin Services PMI. Trade data will also be watched after PMI export orders declined across both the manufacturing and service sectors in April.