US, China inflation, UK GDP and ECB meeting in focus

The Ukraine crisis induced uncertainty remains in focus going into the fresh week, though the attention is expected to be shared with upcoming inflation data releases across US and China. The European Central Bank's March meeting will likewise be closely watched. Meanwhile the UK releases January output numbers and China updates trade figures for February.

The European Central Bank's monetary policy meeting will be closely followed in the coming week amid recent developments on the Ukraine front. This week saw Fed chair Jerome Powell's reiterating the Fed's commitment towards upcoming interest rate hikes in his first day testimony to the US Congress, though uncertainty from the Ukraine war had been acknowledged as expected. While the ECB may continue moving forward with plans to update their forward guidance in the March meeting to reflect their intent to hasten tightening of monetary policy, European central bankers may likewise exercise caution given the proximity to the Ukraine impact.

Meanwhile inflation concerns continue to reign chieftain for markets particularly with the Ukraine crisis further adding pressure. Investors will be able to glean insights into the pre-invasion inflation picture from the data releases across US and China in the coming week. As it is, global manufacturing production had revived from the December low though supply shortages and inflationary pressures continued to constrain growth, a phenomenon that may be exacerbated by the ongoing surge in commodity prices, such as with energy costs.

Other economic data to track in the coming week includes China's trade data, with exports growth expected to have moderated. UK's January output data will also be watched after COVID-19 cases started ebbing in the month.

Global economy reviving from Omicron wave prior to Ukraine war

Russia's invasion of Ukraine has dominated the news flow and markets, the latter focusing on the economic impact of the war. The conflict came just as the global economy was showing signs of having ridden through the Omicron wave relatively unscathed by comparison with prior COVID-19 waves. The JPMorgan Global PMI recovered from a one-and-a-half year low of 51.1 in January to 53.4 in February, with service sector growth in particular rebounding as virus related restrictions were relaxed around the world.

Although still acting as constraints on output, supply chain shortages showed signs of easing. The peaking of the Omicron wave is also likely to help alleviate some of the widespread staffing difficulties reported by firms across the globe in the first two months of the year. Business confidence about prospects for the year ahead surged to an eight-year high. 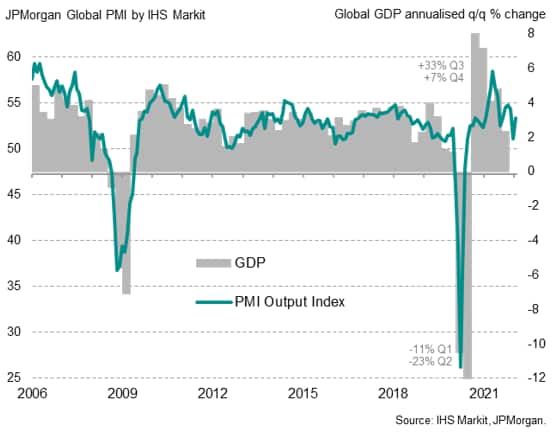 That, however, was before Russia's invasion of Ukraine. As the humanitarian consequences are both unfathomable and tragic, some of the initial economic implications are likely to be more clear-cut. GDP growth forecasts are being revised lower, especially in Europe, and inflation forecasts are being revised higher, though there remains great uncertainty as to the scale of the impact. Before fresh data are released to reveal the initial economic impact in March and beyond, it will therefore be the war and the words of policymakers, forecasters and the politicians which will be watched for market guidance, the backward-looking economic indicators taking a back seat.

US releases February CPI figures on Thursday with the consensus pointing to an acceleration of consumer price inflation to 0.7% month-on-month from 0.6% previously. On a year-on-year basis, a materialisation of the 7.8% forecast will make it the highest reading since January 1982. Core CPI is likewise expected to tick up. According to the IHS Markit US Composite PMI, output prices rose at a faster rate in February, supporting the expectation for a steeper CPI reading.

The European Central Bank will meet in the coming week with no change to policy rates expected. After signalling their intent to hasten the end to net asset purchases and an earlier start to policy rate rises in February, changes to the ECB's forward guidance should not be ruled out in the March meeting. That said, given recent developments, particularly the Ukraine crisis, the ECB may err on the cautious side.

UK January output data will be due on Friday. According to IHS Markit / CIPS UK Composite PMI data for January, UK private sector growth accelerated slightly after growing at the slowest rate in 10 months in December. Manufacturing sector growth outpaced that of services at the start of 2022.

China's trade and inflation data will be released on Monday and Wednesday respectively. Both import and export expansions are expected to have slowed in the month of February according to consensus, though remaining at double digit percentage growth.