The key release of the week is likely to be US inflation for January, though GDP data are updated for both the UK and Taiwan and central bank policy meetings are scheduled for India and Indonesia.

US inflation is widely expected to reach a new four-decade high and bring the market focus back to speculating on the path of FOMC rate hikes. The data follow a week in which the Bank of England hiked rates at back-to-back policy meetings for the first time since 2004, growing more concerned about inflation.

No policy changes are expected at the Reserve Bank of India and Bank Indonesia, though traders will be watching for signs that policymakers in emerging markets may also be looking to tighten policy later in the year amid the global inflation surge and the outlook for rising rates in the developed world.

Worryingly, just as inflation forecasts are generally rising, economic growth forecasts are being revised lower amid the weak start to the year and prospects of real incomes being squeezed by higher prices. Updated GDP for the UK and Taiwan will therefore be eyed for recent growth trends, but are of course backward looking. Perhaps more focus will lie on the China services PMI and US consumer confidence numbers for more up to date signals.

Stock market watchers will also want to look out for the February IHS Markit Investment manager Index (IMI). This survey of US equity investors was prescient in capturing the shift to risk aversion, with the upcoming survey revealing investors' views on what to expect of the month ahead and what's driving the market. View last month's release here.

Policymakers around the world are growing increasingly concerned about anchoring inflation expectations amid further signs of persistent elevated price pressures. With supply shortages widely expected to persist through 2022 and energy prices soaring amid geopolitical tensions, inflation is likely to rise further in the near-term, adding to bets that the Fed, Bank of England and ECB will tighten policy.

However, the current tightening, led by the Bank of England but likely soon to be followed by the FOMC in March, comes at a time of slowing economic growth. This reflects the central banks' general remit towards price stability, but also reflects the broadly-held view that economic growth will revive again quickly as the Omicron wave passes. Having recorded the slowest pace of economic growth for 18 months in January, the JPMorgan global PMI - compiled by IHS Markit - reflected widespread disruptions to business activity due to record COVID-19 case numbers. Virus case are numbers already on a downward trend in many major economies, which will mean pandemic restrictions can be eased and economic growth re-accelerate.

The question - facing markets and policymakers - is just how much the global economy will pick up again. Demand forces have waned in recent months amid various headwinds, including squeezed real incomes, ongoing supply constraints and the withdrawal of pandemic-related fiscal stimuli. By tightening monetary policy, how much do central banks further tilt risks towards growth slowing? Key demand indicators such as new order inflows and global exports will need to be monitored closely in the coming months to assess the underlying resilience of demand in these unusual times 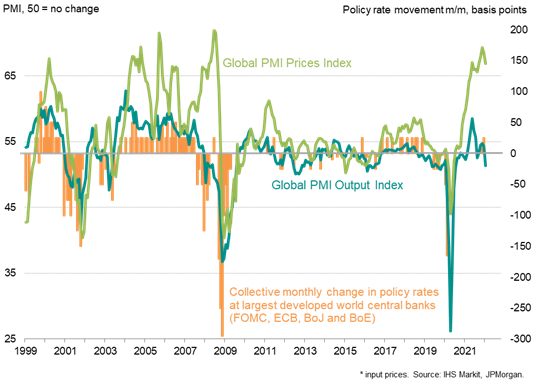 US January inflation data will be released next Thursday with the consensus pointing to a slight slowdown in inflation at 0.4% for headline CPI and 0.5% for core CPI for January. However, that would still push the annual rate up to 7.2% from 7.0%, which would make for a headline-catching 40-year high. While the easing in the monthly rate tallies with recent IHS Markit PMI price data, the survey data also indicated a further worsening of US supply bottlenecks in January, which his likely to keep inflation elevated in coming months.

University of Michigan consumer sentiment data for February will also be updated on Friday, and is widely expected to pick up after being subdued by the Omicron wave in January, but any ongoing weakness will be a concern that the household sector recovery is fading.

UK's December output data and Q4 GDP will be released over the course of the coming week. The monthly data so far show output running 1.1% higher than in Q3, which had also seen a 1.1% quarterly gain. However, IHS Markit/CIPS PMI data pointed to the economy slowing the end of 2021 as services output was hit by elevated COVID-19 cases and increased health restrictions.

Final January CPI data for Germany will also be eyed for further insights into the ECB policy response after eurozone inflation surprised to the upside in the flash January release, hitting a record 5.1%.

Two central banks, the Reserve Bank of India (RBI) and Bank Indonesia (BI) meet in the coming week. IHS Markit forecast for no changes to policy rates for both central banks, but it's likely that some tightening will be seen later in the year so rhetoric will be eyed for clues as to appetite to reduce the accommodative stances. Meanwhile Taiwan's final Q4 2021 GDP reading and January trade data will also be expected in the week. China will also release loan growth figures for January.