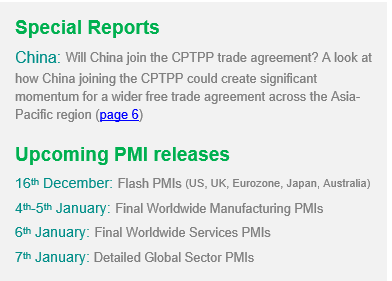 After PMI surveys showed global growth slowing in November, further clues of economic trends in the fourth quarter will be scoured from a host of industrial production and trade data. Third quarter GDP figures are also updated for Japan, the Eurozone and Russia, while the UK issues monthly GDP numbers for October.

Inflation numbers for the US, China and Germany will also be closely watched, albeit with policymakers likely to 'look through' any signs of upward price pressures in favour of providing support to help sustain recoveries. The ECB, Bank of Canada and the Central Bank of Brazil all meet to set interest rates during the week.

Brazil's central bank is eyed for change to its forward guidance after inflation spiked higher and the recovery showed signs of progressing well, though the bank sees the rise in prices as temporary. Meanwhile in Canada the central bank sees the possibility of a faster than previously expected recovery thanks to vaccine developments, but has also raised the spectre of a further rate cut if infection rates rise again.

In the eurozone, the ECB has fueled expectations that more stimulus could be in play. PMI data have disappointed and President Lagarde has stressed downside risks to the fourth quarter.

In the UK, markets will be watching Brexit talks and will also scrutinise the monthly GDP data for October after PMI numbers showed the economy being supported in part by pre-Brexit preparations.

In the US, we may see some upward pressure in consumer and producer price data, but the Fed's new policy framework allows a temporary inflation overshoot. Instead interest will focus on whether the economic recovery is being sustained via updates to consumer confidence, jobless claims, mortgage applications, the NFIB survey and consumer credit.

In Asia, China's updated trade, inflation, money supply and new loan data will be scoured for confirmatory signs that the recovery is accelerating after PMI data showed the strongest growth for over a decade. Japan's GDP data are meanwhile expected to show only a modest, partial recovery during the third quarter.