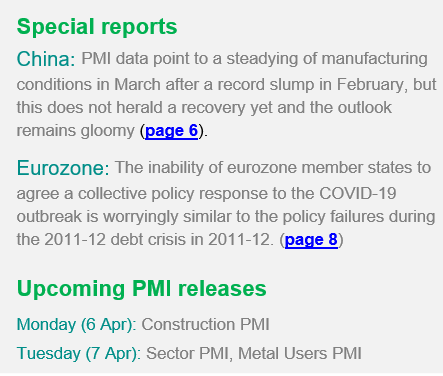 With the COVID-19 pandemic leading to increased measures to control the outbreak, the economic dataflow has started to reveal the impact on the global economy. The coming week sees more official data released to cover the month of March, but analysts are going to have to be careful interpreting official numbers as many agencies will struggle to calculate data using established techniques such as face to face interviews.

The few data series so far available to gauge the initial impact of the pandemic have been private surveys. After the PMIs showed worldwide manufacturing output slumping in the last two months at a rate not seen since 2009, and flash PMI data brought signs of the service sector being even harder hit, more detailed PMI numbers will give valuable insights into precisely where the economic blows have been the most fiercely felt, both by 26 detailed sectors and by major region. February's data revealed that only pharmaceuticals and biotech recorded any growth globally.

In the US, the IHS Markit flash PMI indicated the steepest downturn in output and hiring since 2009, but the most worrying signals have come from jobless claims. The past two weeks have seen the number of Americans applying for unemployment benefits rise to 6.65 million, far surpassing the prior record of 695,000. The University of Michigan consumer survey will also be eagerly assessed for virus impact in March and inflation numbers will be watched for signs of a growing deflationary threat.

Official data updated for Europe will only give insights into February, so will be largely irrelevant for the purposes of assessing the virus impact. However, the UK recruitment industry survey for March will give new clues as to the scale of the labour market hit and house price data will help gauge the UK property market effect .

In Asia Pacific, markets will await central bank meetings in South Korea and Australia, and will also see some March data coming out for inflation in China, Taiwan, Thailand and the Philippines, plus Japan's machinery orders. 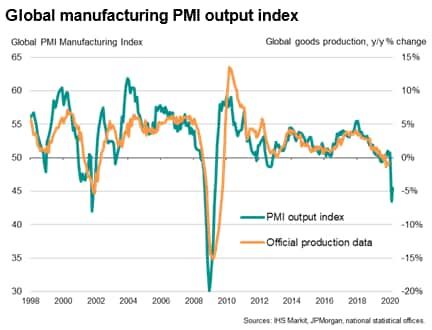