Week Ahead Economic Preview: Week of 4 May 2020 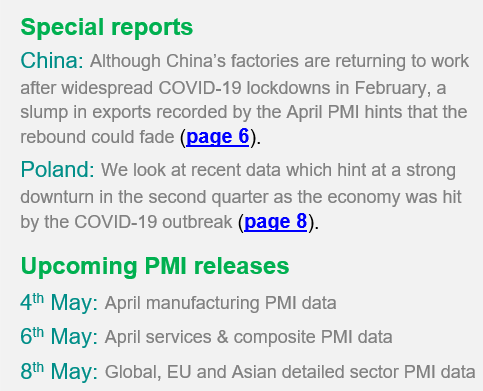 The week ahead sees the US earnings season in full swing with over 1,300 companies reporting, plus there are also key worldwide PMI and US job market data releases to watch, some Asian GDP updates and central bank meetings in the UK and Brazil.

PMI surveys for April, covering manufacturing and services, are published worldwide on the heels of flash PMI data which showed steepening rates of economic collapse. Detailed sector PMI numbers will also record the extent of the impact for different industries.

With measures taken to contain the COVID-19 outbreak having intensified in many countries during the month, notably in the US and Europe, the economic impact appears to have been commensurately greater. Manufacturing PMI data for China, already released up to April, have meanwhile shown only a very modest recovery, suffering a re-acceleration in the rate of export decline, hinting strongly that the recovery could fade.

So far the service sectors have taken the hardest hit from social distancing. With China having started removing some of the restrictions earlier, markets will therefore be looking to the Chinese service sector PMI data for indications of the extent of potential rebounds. Elsewhere in Asia, while the PMIs will give clues as to how economies have performed at the start of the second quarter, first quarter GDP numbers will help assess COVID-19 impacts on Hong Kong SAR, Indonesia and the Philippines.

Brazil's interest rates look set to be cut to fresh record lows next week as the country fights an economic crisis that has led to its currency hitting an all-time low. Analysts will also be eager to see Bank of England rate setters' reaction to news of the UK economy contacting at an unprecedented rate in April.

The week rounds off with the US employment report. Non-farm-payrolls are widely expected to have fallen sharply and Fed chair Powell has warned that the unemployment rate could spike into double digits. Worse will likely follow. US GDP has already fallen at a 4.8% annualised in the first quarter and our GDP tracker points to a 37% plunge in the second quarter. Brace yourselves for some grim data.