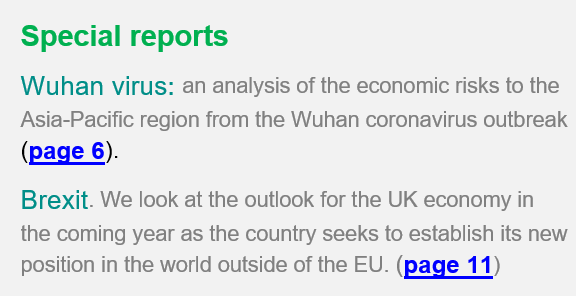 The coming week starts with the publication of worldwide PMI surveys for January and ends with the US non-farm payroll report, though also sees no fewer than 538 companies reporting earnings, including Alphabet, BP and a host of auto makers. In the US the democrat primaries get underway. Markets will also be eyeing Wuhan coronavirus and Brexit developments.

Monday sees the release of worldwide manufacturing surveys for January, followed on Wednesday by service sector updates. The surveys will be eyed for signs that the global business environment has continued to improve after the global PMI closed off 2019 at an eight-month high. The surveys brought indications that the global goods-producing sector has stabilised after a mid-year decline, accompanied by the fastest services growth since July. Notably, the surveys showed the smallest worldwide exports fall since April, largely as a result of easing trade tensions.

Signs of the Wuhan coronavirus impacting business are unlikely to be seen yet in the final PMI data, with the majority of survey responses having been collected prior to 25th January. In fact flash PMI data for January have so far shown encouraging signs. Business rebounded in the UK and Japan after weak fourth quarters. The former showed business perking up after a conclusive general election in December, while business in Japan saw demand revive after typhoon disruptions and the hit from October's sales tax hike. Growth in the US meanwhile struck a ten-month high despite ongoing export-related woes in manufacturing. Eurozone growth remained subdued, but forward-looking indicators brought encouraging gains.

In the US, the PMIs are accompanied by the official monthly employment report and factory orders data (see page 3), while in the eurozone, Germany trade and industrial production data will give important steers on whether recession has been avoided (see page 4)

In Asia Pacific, China PMI data are joined by GDP updates from Hong Kong SAR and Indonesia and monetary policy meetings in Australia, India, Thailand and the Philippines .