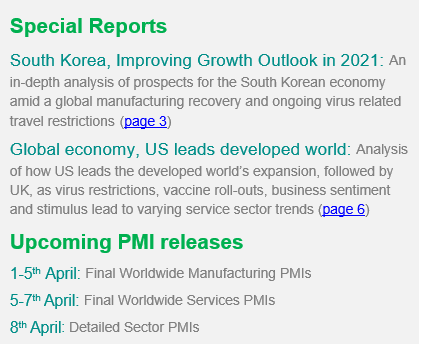 Payrolls and PMIs dominate the economic agenda for the week ahead, with the ECB's latest analysis and eurozone inflation also in focus. Markets will be meanwhile watching for news of further stimulus in the US in the form of additional infrastructure spending.

The worldwide manufacturing surveys will be eyed for rising inflationary pressures, with markets eager to assess whether recent signs of rising prices will prove transitory - as policymakers are expecting - or more troublesome. The surveys have brought welcome signs of factory output growth accelerating to the highest for nearly a decade as economies have rebounded from virus-related shutdowns. Especially strong growth has been seen in the Eurozone, where flash PMI numbers for March showed a 23-year survey record increase in production. But the flash PMIs also brought further signs of production being constrained - notably in the US - by escalating supply problems. Supply shortages have in turn fed through the highest price pressures since 2008.

March's data will therefore be scoured in particular for clues as to whether supply is catching up with demand to alleviate some of the bottlenecks, especially in relation to supplier delivery times and shipping.

There will also be a big focus on the US, with non-farm payroll data released on Friday. Prior data showed an unexpectedly strong surge in employment as 379,000 new jobs were added in February and prior months' data were revised up markedly. The unemployment rate now stands at 6.2% compared to April's peak of 14.7%. With recent robust survey data pointing to upbeat business confidence, buoyed by the vaccine rollout and new $1.9 trillion stimulus measures, hiring is likely to have remained solid in March.

Even more US stimulus looks to be on the cards, with President Biden earmarked to announce at least $3 trillion of infrastructure spending on Wednesday. Any news of additional stimulus could be dampened, however, by countermeasures brought into pay for the extra spending, especially tax hikes.

In Europe, a revamped monthly Bulletin is published by the ECB in a week which sees preliminary inflation numbers issued for March. February's annual CPI came is slightly below expectations at 0.9%, but recent survey data hint that upward pressures are building.

In Asia, the NBS publishes its non-manufacturing PMI for mainland China alongside its factory survey, while Japan updates its retail sales, unemployment, industrial production and Tankan survey statistics.