In a busy week that sees an updated US non-farm payroll report, worldwide manufacturing PMIs will reveal insights into business conditions amid the Ukraine war and China's recent lockdowns. European and US consumer confidence data will meanwhile add further insights to the plight of households as inflation rises to multi-decade highs.

Global market sentiment has remained subdued as concerns have flared over rising geopolitical uncertainty, soaring energy prices, persistent supply constraints and a hawkish Fed. As such, the slew of economic indicators - including worldwide manufacturing PMI data -arrives at a timely period in offering some concrete gauge of the severity of supply and price pressures and their impact on production. As far as the preliminary PMI surveys indicated, output conditions across the eurozone to APAC remained resilient in March, though price indicators have again been flashing red to reflect the mounting of price pressures. This backs the hawkish stance adopted by central bankers such as the Fed in the past week. However, firms have also reported a markedly darker outlook, especially in the eurozone, as the Ukraine war adds to existing headwinds, and consumer confidence is showing signs of waning amid a growing cost of living crisis.

March's US non-farm payroll report will therefore be firmly in focus, and is expected to show both a tightening labour market and rising wage pressures. Any upward surprises could be an immediate trigger of more hawkish rate hike expectations.

Preliminary March inflation data in Germany and the eurozone will also be eagerly assessed, not least by the ECB, amid ever-intensifying price pressures, while in APAC, Bank of Thailand latest policy meeting and Japan's Tankan survey will be due.

March's preliminary 'flash' PMI data provided the first insights into the impact of the Ukraine war on the world's major developed economies, and highlighted two opposing forces for which the interplay will be key to determining economic prospects in the coming months.

First, current output growth remained strong across the developed world — with only a marginal slowdown seen even in the eurozone, closest both geographically and economically to the war — linked primarily to the opening up of economies after the pandemic. Measured globally, COVID-19 containment measures were the least restrictive in March than at any time since the pandemic began. A further planned loosening of these restrictions should help boost growth in coming months.

However, the Ukraine war dealt a blow to business expectations about growth in the year ahead, nowhere less so that in the eurozone but also more broadly. Companies reported that the war has exacerbated existing concerns over the impact of rising prices, supply chains and reduced fiscal and monetary stimulus. Price pressures also hit new highs in March, according to the PMIs.

Monitoring this interplay between the tailwind of the fading pandemic and the various headwinds will drive the economic commentary in coming months. 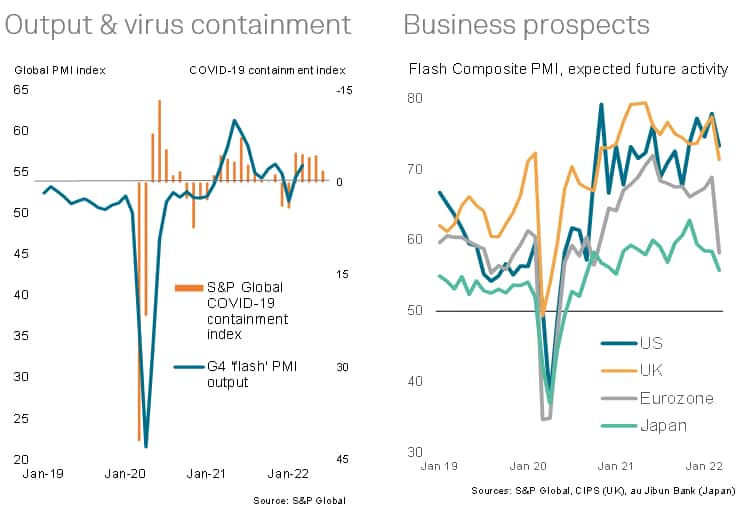 March manufacturing PMI data will be released around the globe for a first look into manufacturing conditions after the eruption of the Ukraine war which sent commodity prices surging. Over and above the survey output index, future expectations, suppliers' delivery times and price indicators will be key to shedding light on any negative consequences from the war. Flash PMs from major developed countries pointed to improving output though a common theme spanning the surveys was intensifying price pressures and weaker business prospects.

February's US non-farm payrolls, unemployment and wage growth data will be released with Refinitiv consensus currently pointing to a 450k non-farm payroll gain, down from 654k previously. The unemployment rate is expected to tick down to 3.7% while average earnings growth is set to accelerate to 0.4% month-on-month. According to the March S&P Global Flash US PMI, employment rose at the fastest rate for nearly a year, alluding to expectations for a positive set of labour market data in the upcoming release. Meanwhile March consumer confidence and personal income, consumption and price data will be due, providing an insight into how households are coping with 30-year high inflation, while a slight upward revision is expected for US Q4 GDP to 7.1%.

In Europe, preliminary German and eurozone inflation data will be due for March. Amid the heightening of price pressures reported across the flash PMI surveys, the pace of price inflation - already at a record high - will be closely watched by a more hawkish-sounding ECB. Business and consumer confidence data will all be scoured for the impact of the Ukraine invasion. In the UK, updated Q4 GDP will be due for a quarter that started strong but saw the Omicron variant disrupt the economy in December.

In APAC, the Bank of Thailand meets with no change to monetary policy expected. Japan releases employment figures and the Tankan survey for Q1. Sentiment is expected to have deteriorated in line with recent au Jibun Bank PMI data amid the Omicron wave.