Markets will inevitably be dominated by the Ukraine crisis, though from an economic data perspective worldwide manufacturing and services PMIs will be released, with the first trading week of March also bringing the latest US labour market report. Central bank meetings in Canada, Australia and Malaysia will also be in focus while key GDP data will be released across Switzerland, Australia, India and South Korea.

Following a week of heightened risk sentiment surrounding the Russia-Ukraine crisis, global markets will find the release of worldwide PMI figures in the coming week for both manufacturing and service sectors. Flash PMIs have so far preluded developed world growth rebounding in February, and the global figures will be in focus in the coming week for confirmation of this trend on a global scale. G4 economies had also seen price pressures persist according to flash PMIs, a trend that may only garner further attention as the latest geopolitical unrest pushes up commodity prices.

Central bank meetings will be in abundance at the start of March with the Bank of Canada (BoC) being the highlight in the coming week. Expectations are for the BoC to move ahead with raising interest rates from their March meeting to tackle rising inflation and amid a tight labour market.

On economic data, both inflation figures and GDP numbers will also be released around the world from the eurozone to Australia. Higher inflation figures may once again stoke concerns of more hawkish central bank pivots to avoid 'falling behind the curve'.

Final PMI numbers are published for manufacturing and services, which will allow central banks to assess economic trends prior to the Ukraine conflict. Flash PMI surveys for February showed economic growth rebounding from the worst of the Omicron economic impact, which turned out to be both modest and short-lived in the US and Europe. However, persistent supply constraints - both in terms of raw material supply issues and labour shortages - not only constricted manufacturing production but also led to further upward price pressures, which were in turn exacerbated by soaring energy prices. 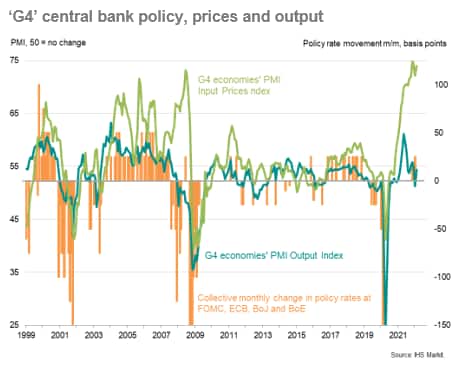 However, inflation risks have now risen with the Ukraine crisis, while risks to outlook for demand, and broader economic growth, have meanwhile shifted to the downside due to the conflict.

The war has further lifted commodity prices, notably energy (but also likely food in Europe), while the supply disruption could worsen, especially if safety stock building ramps up again. Although the final PMI numbers released in the coming week were collected prior to Russia's invasion of Ukraine, the February PMIs will be important in assessing the Omicron impact outside of the US and Europe, especially in Asia, and in particular for any deterioration of global supply lines at a time of escalating conflict.

How the messaging from the central banks might be affected by the conflict in Ukraine will be important to watch, commencing with RBA, BoC and BNM meetings this week.

*Press releases of indices produced by IHS Markit and relevant sponsors can be found here.

Worldwide manufacturing, services and composite PMIs will be released in the coming week for a look into how global economies had fared amid varying degrees of COVID-19 Omicron variant disruptions. Flash PMIs have indicated the developed world growth had broadly rebounded in February as the Omicron wave subsided. The same may not be said of Japan as the Omicron wave continued to rise into early February.

Meanwhile supply constraints remained widespread and price pressures persisted, according to flash PMIs. The eurozone notably saw prices rising at a record rate, a trend to similarly track for other economies, adding pressure for more aggressive central bank policy tightening around the world.

February US non-farm payrolls, unemployment rate and average hourly earnings figures will be released on Friday to provide a first look into the US labour market conditions as the economy rebounds from the Omicron wave. Private sector employment was shown to have expanded strongly in February according to the latest IHS Markit Flash US Composite PMI. The current consensus points to a 381k non-farm payroll gain.

The Bank of Canada meanwhile is expected to respond to rising inflation and a tight labour market by raising interest rate by 25 basis points in the March meeting.

Inflation numbers from the eurozone and Germany will be released for January after PMI figures indicated persistent price pressures for the global economy.

The Reserve Bank of Australia and Bank Negara Malaysia hold policy meetings next week with no changes expected.