Manufacturing PMIs and Russia, UK and US GDP data to reveal economic trends

The start of the new month brings fresh global manufacturing data in the form of the PMIs. The surveys will provide an important update on broader factory sector performance in June after the flash PMIs painted a downbeat picture for the major developed economies.

The preliminary June PMI data showed factory orders falling for the first time in two years in the US with renewed declines also seen in the UK and Japan. The eurozone - closest to the war in Ukraine - saw orders fall for a second successive month. The deteriorating manufacturing demand picture, alongside a worsening trend in services growth, led to an immediate recalibration of market pricing for interest rate paths in the US and Europe, and also saw commodity prices come under pressure.

The final manufacturing PMI will provide an all-important missing piece of the June picture via updated production numbers for mainland China. In particular, analysts will be assessing whether the relaxation of some COVID-19 containment measures will have helped global supply chains improve further, especially across Asia.

CPI data is meanwhile expected for the Eurozone and Indonesia, with inflation expected to remain elevated at record levels in the former. At the same time, policy makers will be keeping a close eye on Eurozone unemployment figures, which has fallen continuously over the year to signal a tightening labour market.

Since its invasion of Ukraine and the subsequent stringent sanctions, Russia's economic conditions have deteriorated sharply. Latest Russian GDP, unemployment and retail sales data will detail how the country has fared in May.

Updated first quarter GDP figures for the US and UK will also come to light this week and will reveal more details and granularity into the economic trends in the first quarter of the year, partly reflecting the impact of the war.

Elsewhere, Brazil, Japan and South Korea industrial production data will be updated and be gleaned for the impact of global supply constraints and price pressures.

We are in unchartered territory as far as central bank policy is concerned, according to S&P Global's PMI survey data. The provisional flash PMI data for June (see special report) covering the US, Eurozone, UK and Japan showed business activity growth slowing sharply as a result of a severe worsening of demand conditions.

New orders in fact fell on aggregate across these major developed economies for the first time since the initial pandemic lockdowns in the second quarter of 2020. However, demand is now falling not because of COVID-19 containment measures, but because the soaring cost of living is hitting just as the economic boost from the reopening of economies from the Omicron wave is starting to fade.

Historical analysis of the surveys' leading indicators, such as manufacturing orders-to-inventory ratios and companies' future output expectations, are now consistent with economic contractions in the US and Europe in the third quarter, absent a sudden revival in demand. This, as our chart shows, would be an unprecedented demand environment in which to be hiking interest rates.

However, a welcome side-effect of the downturn in demand has been an easing of price pressures. Although still elevated, the PMI survey gauges of inflationary pressures in both manufacturing and services have generally fallen from recent peaks. It therefore seems that slowing demand is already doing so of the job of tighter monetary policy. 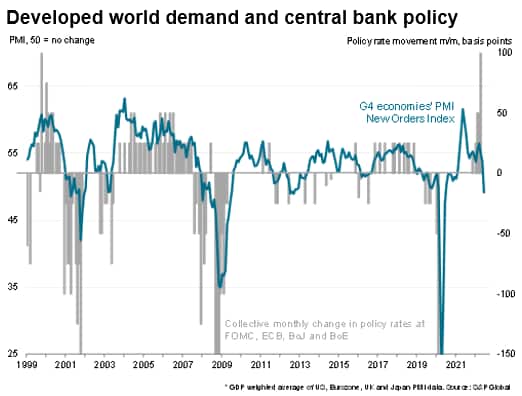 * Press releases of indices produced by S&P Global and relevant sponsors can be found here.

After June's flash PMI's pointed to a weakening factory sector, attention will shift to final global manufacturing PMI data for June, notably for Asia and especially in terms of the signals for supply chains and prices.

Final US GDP estimates for Q1 as well as estimates for GDP growth for Canada in May are expected. Prior data showed the US economy contracting at a 1.4% annualised rate in the first quarter, but inventories and trade were seen as major drags, meaning the headline understated the underlying health of the economy. Current estimates suggest a rebound to 0.8% growth in the second quarter, averting recession. But recent PMI data have suggested a new downturn in the third quarter is a rising possibility. US durable goods orders, Conference Board consumer confidence, trade numbers and house price data are also all updated.

The impact of changing COVID-19 restrictions in mainland China - as well as the sustained impact of its zero covid policy on supply chains - will be eagerly assessed though updated PMI numbers. Meanwhile the closely watched Tankan survey of manufacturers for Q2 is scheduled for Japan, which PMI data have suggested will have improved yet remain constrained by supply conditions. Japan also see official statistical updates for industrial production, retail sales and employment.

South Korea and Australia will also see consumer spending on retail figures released, while India will release figures on imports and exports for June.