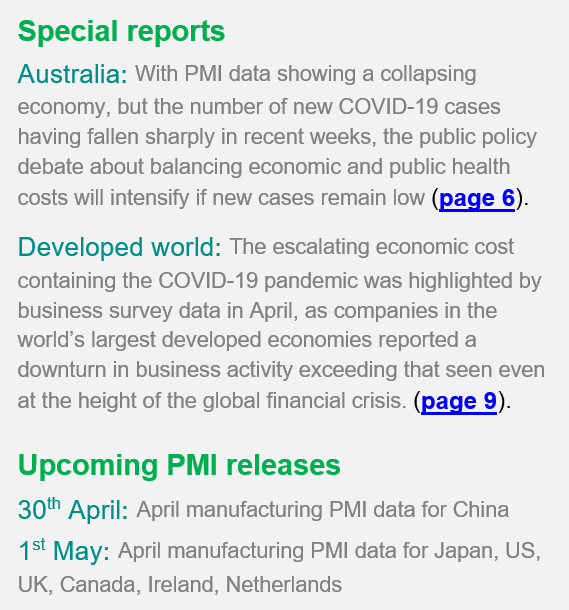 The week ahead sees the US earnings season continue in full flow as well as GDP data for the US and Eurozone, accompanied by central bank policy meetings in the US, Eurozone and Japan. PMI data for China will also be eagerly anticipated.

Policy meetings at the Bank of Japan, the Federal Reserve and the European Central Bank will be scrutinised for their views on the global economy and guidance on potential changes to the policy stance after key indicators showed alarming declines. Flash PMI surveys showed record rates of economic collapse in all major developed economies in April as a result of increasingly drastic measures taken by governments to contain the COVID-19 pandemic.

In the US, the FOMC has already held two unscheduled policy meetings in which emergency stimulus was announced, and analysts will be eager to see the response to the recent further deterioration in the data flow. First quarter GDP data will set the scene and are expected to show the economy already in decline.

Similarly, preliminary first quarter GDP estimates for the euro area, including releases for France, Spain and Italy are released in a week where the ECB policy meeting will be closely watched for signs that further mulled easing measures could be deployed. Several manufacturing PMIs and eurozone inflation data are also released.

In Asia, eyes will focus on China and the April updates to manufacturing PMI surveys from Caixin and the NBS, with hopes pinned on better news after initial signs of the sector stabilising in March. Final manufacturing PMI data for Japan will also be closely watched as the central bank meets, albeit with little appetite seen for further stimulus just yet.