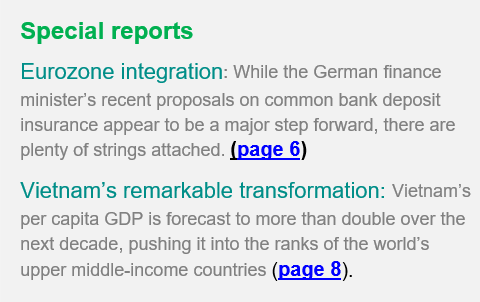 Geopolitical risks remain at the forefront of investors' minds, meaning trade wars, Brexit and UK politics and escalating tensions in Hong Kong SAR could all steer markets. However, the week also sees key data releases in the US and Eurozone which will help guide policymaking decisions in upcoming December central bank meetings, while the trade war impact on China will be assessed via fresh PMI and profits data.

In the US, all economic data will be eyed for clues as to whether the 11th December policy meeting will see anything other than the FOMC sitting on its hands. Chair Powell sees further cuts as unlikely assuming conditions do not deteriorate, meaning incoming data will be watched carefully by the markets for signs of further weakness. Durable goods orders, consumer spending, PCE inflation, homes sales, goods trade and a second estimate of GDP fill the calendar.

In Europe, a clutch of inflation numbers for the Eurozone, Germany, France and Spain will be eyed for price trends in November ahead of Christine Lagarde's first ECB Governing Council policy meeting on 12th December, as will European Commission confidence surveys, which include the German IFO survey. GDP updates are also issued for France and Italy. However, UK politics will no doubt hold centre stage as the 12th December general election nears.

In Asia Pacific, trade war impact on China will be sought from industrial profits data and the NBS manufacturing PMI numbers, the latter having disappointed markets in October, while GDP data is expected to show a further cooling of India's economy. Bank of Korea's policymakers will meanwhile meet to discuss the need for further stimulus. In Japan, a number of data releases will add insight into the impact of October's sales tax rise.