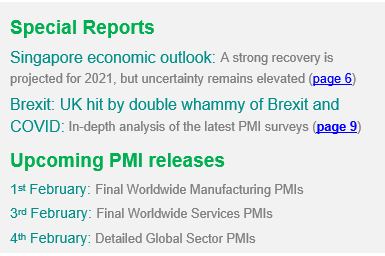 A busy week of fourth quarter GDP releases also includes the first FOMC meeting of the year. The GDP data will be scoured for clues as to how much economic growth momentum has been sustained among the further virus waves, while the FOMC meeting will be eyed for any changes to the Fed's outlook.

US policymakers showed signs of becoming more update at the last FOMC meeting, and recent news of the growing prospect of additional fiscal stimulus and vaccine roll-outs could see some Committee members even more bullish, fueling more discussion in the markets of when asset purchases could start to be tapered. However, the focus is likely to remain on the need for policy to stay accommodative at least into 2022. A near-term test will be the extent to which GDP growth was sustained in the fourth quarter. Surveys such as the PMI had been relatively buoyant in the closing months of 2020, but the rate of expansion will have slowed markedly from the third quarter, when the economy rebounded from the lockdowns seen in the first wave of the pandemic (page 3).

In Europe, fourth quarter GDP are also released for Germany, Spain, France, Austria and Belgium. Survey data have shown the eurozone succumbing to renewed virus-fighting measures, though the economy looks to have fared better than during the second quarter thanks to manufacturing resilience and the lockdowns not having been as severe as earlier in the year. Germany appears to have fared especially well, though even here a slight downturn may well have been seen. In the UK, the labour market is in focus, with jobless data in particular eyed for clues as to the long-term pandemic impact (page 4).

A range of key indicator for Japan will be assessed for the impact of rising virus cases, while GDP releases from Asia will provide fourth quarter economic insights into Taiwan, South Korea, Hong Kong SAR and the Philippines. All look to have seen growth slow compared to the third quarter, with the possible exception of a more resilient Philippines, but importantly renewed downturns look likely to have been avoided thanks in part to resurgent growth of manufacturing and trade (more on page 5).