A string of Q1 GDP data will be released in the coming week across the US, eurozone, South Korea and Taiwan. The Caixin China General Manufacturing PMI will also offer a first look into China's manufacturing health amid the latest COVID-19 disruptions. The flash eurozone inflation reading will also be eagerly awaited while Australia and Singapore CPI figures will likewise be released. The Bank of Japan meanwhile convenes and updates their forecast figures.

As the equity markets continue to grapple with the implication of higher inflation amid the string of Q1 earnings releases, we see next week offering some return of the focus to fundamentals with a series of tier-1 economic data updates. Specifically, both the US and eurozone will release flash estimates for first quarter GDP, a period that had seen easing COVID-19 restrictions and the Ukraine war having had mixed effects upon growth. The extent of slowdown from the fourth quarter of 2021 amid increasingly uncertain conditions will be watched.

Flash inflation data from the eurozone will also be due in the week following the S&P Global Flash Eurozone Composite PMI release, which offers a first look into the price trends in April. The inflation update comes as ECB policymakers are increasingly worried about anchoring inflation expectations. Likewise in Australia and Singapore, inflation numbers will be updated with particular focus on the Australia Q1 CPI given recent remarks from the Reserve Bank of Australia with regards to faster inflation and the potential for quicker rate-rises.

In APAC, China's COVID-19 conditions remain severe and the April China Manufacturing PMI will offer the earliest insights into manufacturing sector conditions amid persistent stringent measures to deal with the spread of the Omicron variant. The Bank of Japan will be the sole central bank meeting held in this part of the world. Although no changes are expected on the monetary policy front, the central bank's projections will be closely scrutinised.

After the latest flash PMI surveys showed elevated inflation pressures persisting into April, the heat on policymakers at European central banks has turned up. The survey data showed an unprecedented rise in average prices charged for goods and services across the eurozone, and the UK recorded the second-highest ever rise, with April's jump only exceeded over the past two decades by that seen in March. Existing pandemic related price pressures have been exacerbated by the impact of the Ukraine war, most notably via energy prices.

This week's official inflation update for the eurozone is therefore likely to bring further bad news. The PMI data out of China will also be eagerly assessed, as traders and policymakers seek to gauge the likely impact of China's latest lockdowns on trade and supply chain delays over the coming months, which could add to global price pressures.

One potential source of easing price pressures could come from oil. While the Russia-Ukraine war has put upward pressure on oil and energy costs, it is possible that some alleviation of this upward pressure could come from a slowing in the global manufacturing economy. As our chart below shows, the oil price has risen far more than is consistent with the current global manufacturing expansion, with March's PMI data showing just two-thirds of all economies covered by the PMIs to be reporting rising output, down from over 80% at the end of last year. If this weakness spreads further, prices for commodities such as oil may only be deviating further from demand fundamentals. 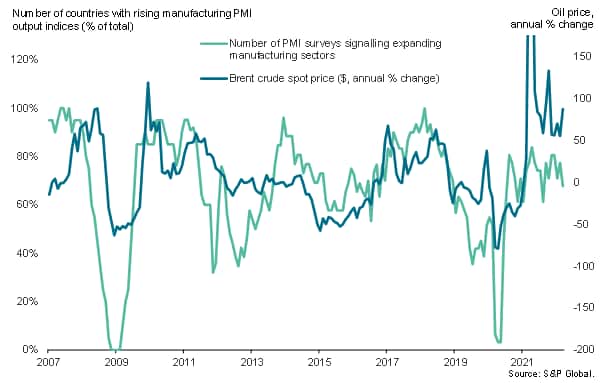 The first estimate of US Q1 GDP will be released next week with the consensus pointing to 1.0% growth for the first three months of 2022. That said, our US economics team is expecting a below-consensus print. Recent data pointed to a weaker performance in the months immediately preceding the Russian invasion of Ukraine, leading to expectations for a sharp a slowdown of GDP growth from the strong 6.9% annualised pace registered previously. March personal income and consumption data will also be released, as well as durable goods orders, consumer confidence and new home sales.

Canada's February GDP will also be due with recent manufacturing PMI data having indicated that operating conditions strengthened on the back of solid output growth.

Eurozone Q1 GDP will also be updated in the coming week alongside Germany's flash Q1 GDP figures. First quarter growth performance will be closely watched given the spill over effects from the Russia-Ukraine conflict. March PMI data showed that, while growth persisted, overall growth momentum fell as business sentiment slumped alongside rising prices on the back of the Ukraine war.

Perhaps more importantly for monetary policy, flash April inflation figures from the eurozone will be released on Friday.

The Bank of Japan (BoJ) convenes in the coming week though no change to monetary policy is expected for the central bank that remains committed to their ultra-loose monetary policy stance, even as many of their developed economies' peers proceed to raise rates.