Flash PMIs for January will be released next week while central bank meetings in the US and Canada unfold. The first US Q4 GDP reading will also be of interest amid continued US earnings updates. In APAC, South Korea and Taiwan release Q4 GDP while Australia and Singapore inflation data are due as well.

The first Fed FOMC meeting of the year will be closely watched for signals of an imminent hike, expected as early as March. US treasury yields and the greenback alike had found strength this week, ahead of the Fed meeting, while US equities were caught between earnings influences and hawkish Fed expectations. The Fed meeting, alongside a likely solid Q4 GDP print and earnings updates, will be key market drivers in the coming week. We will also be getting more timely signals from January flash PMI data as the COVID-19 Omicron variant continued to impact the global economy into the start of the year. The US led the developed economies at the end of last year as the Omicron variant hit Europe hard in December while cost pressures remained steep, bucking the trend of peaking price pressures seen in other developed countries. The January update will therefore in particular offer crucial information on the state of economic development in the US amid rising infection rates. As far as US equity investors are concerned, sentiment was seen turning negative in January amid Omicron, policy and political concerns.

Also watch out for CPI numbers from Australia and Singapore, as well as preliminary Q4 GDP readings from Taiwan and South Korea.

January's flash PMI data will provide the first broad insight into the economic impact of the Omicron variant's spread across the major developed economies. The new COVID-19 variant has certainly proven more contagious, with case numbers spiking well above prior highs to new records in the US, Australia, the UK and all four major eurozone economies. Japan and other parts of Asia which are critical to supply chains have also been affected.

Containment measures to control the virus have been stepped up as a result, with IHS Markit's global containment index rising from 26 in December to an eight-month high of 29 in January, up from a pandemic-low of 22 in November. This containment gauge has risen especially sharply in the eurozone and to lesser, though still notable, extents in the UK and the US, and remains at the highest since the start of the pandemic in China.

Hence the PMI data will be eagerly assessed for the impact of these new restrictions on the service sector, and notably hospitality, which already suffered a subduing impact from the nascent spread of Omicron in December (PMI data were collected mid-month). Any major impact could lead to GDP estimates for the first quarter being revised lower, and could be a cause for concern for policymakers that have turned increasingly hawkish in recent weeks.

However, a key second Omicron impact to watch for is the effect on inflation. A key mechanism to watch for the feed through of Omicron to higher prices is the PMI's suppliers' delivery times index. Global supply delays had shown signs of easing in December, but any renewed lengthening is likely to lead to higher prices, especially if combined with renewed constraints on manufacturing output. Read more here. 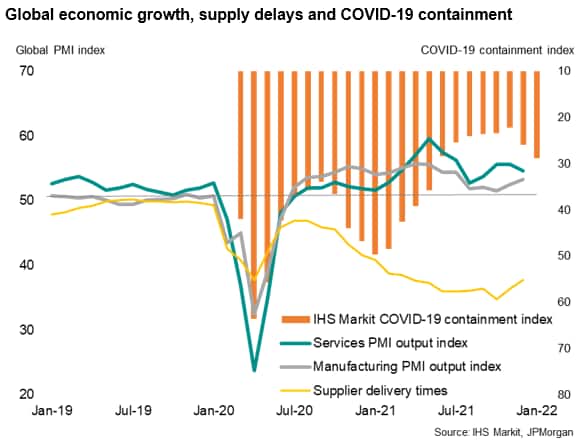 The early flash PMI data for January will be released on Monday across developed economies including the US, UK, eurozone, Japan and Australia.

December's PMIs pointed to global growth momentum slowing amid the Omicron variant's hit, although manufacturing production growth accelerated as supply disruptions eased. The Omicron variant's spread has since extended, and various developed countries have seen their COVID-19 conditions remain severe into the start of 2022. This places the focus on how the upcoming flash January PMI will fare. Specifically, growth momentum across various developed countries releasing flash PMIs will be observed for any signs of service sector activity being further affected and whether supply chains pressures may worsen once again with the spread of the more infectious COVID-19 variant. Price gauges will also be keenly watched following heightened expectations for central banks around the world to follow the US Federal Reserve in adopting an increasingly hawkish stance.

The first Fed FOMC meeting of the year will unfold next week. Recent indications have pointed to the Fed commencing their rate hikes as early as the March meeting, which leaves the upcoming meeting one to track the Fed's signals for the imminent hike. The first Q4 GDP reading will also be due in a week where the market will be closely tracking earnings. Many economists are meanwhile expecting the Bank of Canada to start hiking rates at its Wednesday meeting.

Alongside PMI data, eurozone consumer confidence and business sentiment surveys will be released.