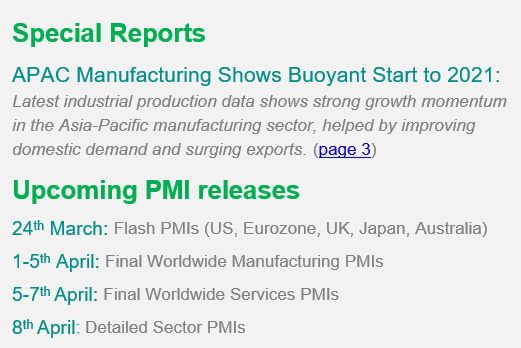 A jam-packed economic calendar for the week ahead sees the release of flash PMI data for the Eurozone, UK and US, as well as Japan and Australia, all of which will be eyed for first indications as to how economies are faring as the first quarter of 2021 comes to a close.

February PMI data highlighted a notable divergence between the US and Europe, with the former driving the global expansion. As such, March flash PMI data will be keenly watched to assess the impact of stricter restrictions in Europe amid a third wave of infections across the continent, and also for signs of any let up in global supply chain disruption.

As concerns regarding the virus's spread heighten across Europe once again, German consumer confidence figures for April are released, providing an insight into customer sentiment in the eurozone's largest economy. Final Q4 GDP estimates are also published for Spain and the Netherlands.

In the UK, focus is also centred on labour market performance during the opening stages of the year, as key official data covering unemployment and wages are released. Inflation figures will meanwhile be carefully watched for signs of building price pressures, with PMI data pointing to sharp rises in both input costs and output charges in February.

In the US, the release of official durable goods orders data for February will be used to eye manufacturing consumer confidence amid recent robust growth among goods producers, according to PMI data. At the same time, we expect final fourth quarter GDP figures to be little-changed on the second estimate of 4.1% growth amid buoyant PMI figures in the year-to-date.

Flash PMI data for Japan follows closely after the minutes for the latest monetary policy meeting of the Bank of Japan are released, with many awaiting details on the recent policy framework review. Meanwhile, the Central Bank of the Philippines are due to meet in the week ahead, with balance of trade data for Thailand and unemployment numbers from Taiwan also due for publication.