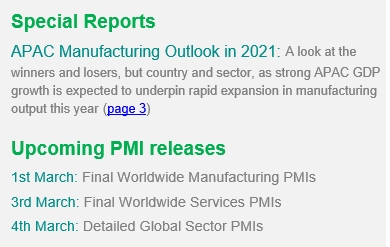 The week ahead sees fresh estimates of GDP in some major economies including the US, Germany and France, as well as some more up to date higher frequency statistics such as US durable goods orders, sentiment surveys and UK labour market numbers, which will be eagerly awaited for signs of economic health early in 2021. Policy action - or more likely a lack of it - meanwhile comes from China and New Zealand.

The US sees a further estimate of fourth quarter GDP, which is expected to show a slight upward revision to 4.1% from 4.0%. However, it's the higher frequency data for the opening months of 2021 which will garner the most attention amid signs that the economy has sustained a strong pace of expansion, even showing signs of growth accelerating. IHS Markit's US flash PMIs showed the strongest private sector expansion for almost six years, fueled by surging service sector activity (buoyed in part by stimulus cheques), and a sustained strong manufacturing expansion. Durable goods orders are therefore expected to show strong growth, while new homes sales are expected to have increased and consumer sentiment likely to have improved.

In Europe, fresh detailed estimates of fourth quarter GDP are also published for France, Germany and Portugal, plus first estimates are released for Switzerland, Poland and Denmark. Prior data showed France contracting by 1.3% on the three months to December but Germany eked out a 0.1% gain. In the UK the focus is on the labour market, with official data on employment, wages, vacancies and joblessness released, the latter coming under particular scrutiny amid growing calls to extend the country's furlough scheme beyond April. Consumer and business sentiment surveys are also released across Europe, including the IFO survey for Germany.

In Asia Pacific, the PBOC is expected to kick off the week by leaving its Loan Prime Rates unchanged, seeking to safeguard its recovery path until the pandemic risks have further abated.

No change is also anticipated at the Reserve Bank of New Zealand, according to the consensus, where the policy rate is expected to remain at an historic low of 0.25% for some time to come.

In Japan, official industrial production and retail sales data will be eyed for confirmation of the divergent signals from the surveys. The flash PMI number from au Jibun Bank/IHS Markit showed manufacturing performing well on the back of rising exports, but virus containment measures continued to hit services.