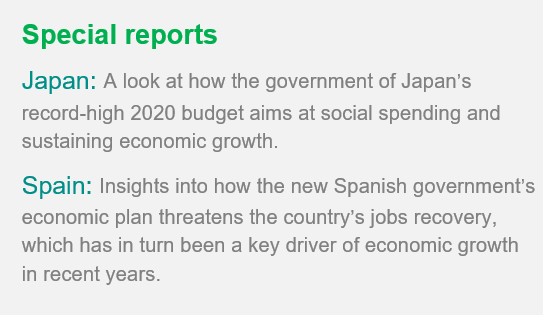 A week which sees Davos host the 50th World Economic Forum commences with the IMF's latest forecast on Monday and rounds off on Friday with the flash PMI surveys, which will provide the first insights into global economic trends at the start of the year.

One of the key updates will be the UK flash PMI, as any failure of the survey data to show a revival of economic growth at the start of the year is likely to trigger an imminent rate cut by the Bank of England when its Monetary Policy Committee next meets on 30th January. Policy had been kept on hold during Brexit uncertainty in the lead up to December's General Election, but recent weeks have seen growing numbers of policy setters grow uneasy about the ability of the economy to spring back into life. The PMI has been specifically cited as a determinant of whether a swift loosening of policy is warranted.

Similarly in the eurozone, where ECB policymakers meeting during the week, insight into the scale and timing of further potential monetary stimulus will be provided by the flash PMI, which showed growth picking up only modestly in December to end the weakest quarter since 2013, as well as EC sentiment surveys. Of particular interest will be whether the services sector has continued to show resilience in the face of the manufacturing downturn.

In the US, the flash PMI numbers will be especially important for ascertaining whether manufacturing and services sectors have started the year with growth sufficiently strong to support our estimates of first quarter GDP growth running at just below 2%. Survey jobs numbers will also help guide non-farm payroll estimates.

In Asia Pacific, Japan PMI numbers will be eyed for hopes that post-tax-hike weakness, exacerbated by typhoon disruptions, will have begun to fade, helping the economy lift from the fourth quarter malaise. Central banks in Japan, Indonesia and Malaysia also meet to decide on monetary policy.