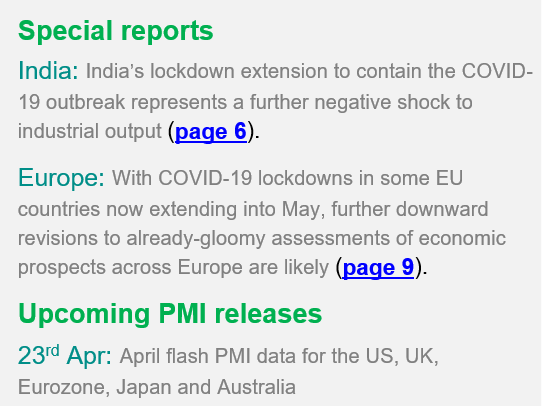 The week ahead sees around 500 US companies report earnings, providing an initial insight into how the COVID-19 outbreak is hitting revenues and profits at some of the world largest firms. The list encompasses tech, consumer products, airlines, telecoms and pharmaceuticals, with analysts especially eager to assess guidance on full-year expectations.

Some of these expectations will be steered by the economic data flow, which in recent weeks is hinting at a global downturn of greater initial ferocity than seen during the global financial crisis. In that respect, flash PMI survey data will provide the first comprehensive picture of how some of the world's major economies have fared in April. March PMI data showed record rates of collapse in the UK and Eurozone with Japan contracting at the fastest rate in a decade and the US suffering the steepest downturn since the global financial crisis. With business closures and social distancing measures having been stepped up in many countries in April, it is widely expected that the PMIs will have deteriorated further as we head into the second quarter.

Other key components of the flash PMIs to watch will be the survey's price and employment gauges, which also fell sharply across the major developed economies in March.

In the US, the flash PMIs and earnings reports are joined by jobless claims, University of Michigan consumer sentiment, home sales and durable goods orders data.

Europe meanwhile sees the PMIs accompanied by sentiment surveys from the European Commission, which also includes the IFO survey for Germany, as well as the April Household Finance Index. Updated labour market numbers from the UK are also likely to show a spike in unemployment benefit claims.

In Asia, April trade numbers for Taiwan, Thailand and Japan will also garner attention to gauge the extent to which Asia's exports have suffered, and maybe whether there are any signs of supply chains from China being restored.