The first glimpses of worldwide economic growth and inflation trends at the start of the third quarter will be revealed with flash PMI surveys at the end of the week. But first, the European Central Bank, the People's Bank of China, the Bank of Japan, Bank Indonesia and the Central bank of Russia will all hold monetary policy meetings in what's going to be a busy week of economy watchers.

Markets have stepped into murkier waters in recent times with recent Investment Manager Index (IMI) survey data showing renewed risk aversion and a marked drop in sentiment regrading corporate earnings growth amid rising recession risks. Flash PMI updates for the US, Europe and Japan will therefore be scrutinised to gauge recession risks as well as the potential peaking of inflation.

The ECB is widely expected to hike their rate by 25 basis points this week but a 50-point rise is also on the table. With the euro at a 20-year low against the US dollar, markets will be eager to assess whether the hawkish mood is standing up to the test after weak-looking survey indicators. Flash PMI data for the Eurozone will follow on Friday. Leading indicators pointed to elevated downside risks, but also some cooling of price pressures in June.

The BoJ also meets, and again the weak currency is in focus as policymakers have stressed that their focus will be on supporting the economy if necessary. The PMI strengthened in June, but flash figures will be eagerly awaited to see if this post-Omicron growth momentum fades. Japan's CPI data will also be eyed, with the PMI having pointed to accelerating price pressures in June. Meanwhile, it's unclear what the outcome of this week's PBoC meeting will yield after China left their key policy rate unchanged in May. Since then there have been some signs of reviving economic growth.

Meanwhile, close watchers of the UK will be treated to a plethora of data, starting with labour market figures. The jobless rate is expected to hold at 3.8% but CPI is expected to rise to 9.6%, meaning the economy looks set to continue to ache from the intensifying cost-of-living crisis. Wage data, however, could show some signs of easing after surveys pointed to a cooling UK labour market.

The week ahead's flash PMI updates will reveal how the world's major developed economies - the US, Eurozone, Japan, UK and Australia - are faring at the start of the third quarter.

The importance of the indicators is of course most evident in terms of steering views on central bank policy, with June's weaker than expected data prompting a re-pricing in the bond markets of how aggressive 2023 rate paths will be. The data also of course triggered renewed weakness in the euro, and strength in the US dollar as a safe haven asset. The weak flash PMI new orders data also pushed commodity prices lower, notably oil.

The PMI survey current output indicators will therefore likely again play second fiddle to the forward-looking new orders indices, the latter having fallen to more worrying extents than the output indices in June to suggest demand conditions are turning sour. However, equally important will be to watch the survey's input cost and suppliers' delivery times indices. One would expect these to be signalling weaker cost growth amid fewer supply constraints, reflecting not only the weaker demand environment but also the drop in oil and other commodity prices seen in recent weeks. 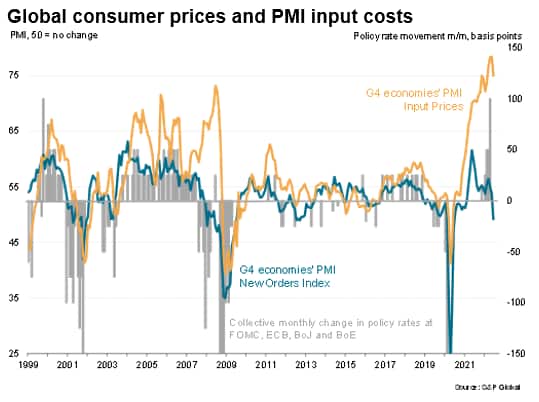 Italy Balance of Trade (May)

Spain Balance of Trade (May)

Flash PMIs for US, Europe and Japan

July's flash PMIs will be released across the US, UK, Eurozone, Japan and Australia. June's PMI figures pointed to a slowdown of growth and some contractions in demand and output. Survey price gauges remained persistently high, however, though there were some signs that inflationary pressures were starting to subside. Not only will July indicate how countries have fared at the start of Q3 amid tightening financial conditions, but will also provide a timely update on cost pressures.

This week will see US flash PMI in focus after last month's data pointed to a US demand falling as inflation rates hit 40-year highs, but leading indicators of inflation fell. Growth is expected to slow in July.

Meanwhile, after Canadian policymakers surprised the market with a larger than expected 100bp rate hike, this week's inflation data will be in focus with the CPI predicted to remain high around the 8.8% mark.

A great deal of significant economic events and releases are scheduled for Europe this week, with the ECB interest decision top of the agenda. Policymakers are expected to execute a 25-basis point hike and are likely to follow with a further 50 basis point hike in September, but a 50-bp rise can by no means be ruled out at the July meeting as inflation worries continue to mount and the euro descends to 20-year lows below parity to the dollar. The ECB will meet after core inflation and sentiment data, with PMI data soon following.

Elsewhere, the UK labour market has performed resiliently despite growing inflationary concerns. Data released on Tuesday will reveal the employment and jobless rates, vacancy rate and wages for the nation.

Three central bank meetings are set to take place in the APAC region. The PBOC is expected to maintain its stance on financial stability by keeping rates at 3.7%. Likewise, the BOJ (-0.1%), and Bank Indonesia (3.5%) will maintain previous bank rates.

Meanwhile, last week saw Singapore step up its inflation fight with a tightening of monetary policy. This week, June's inflation figures will shed light on the extent of pressures.