A busy week ahead is lined with central bank meetings in Japan and Malaysia while labour market and inflation data from the UK will be in focus. German ZEW survey figures and eurozone consumer confidence numbers will also be due while in APAC, China's data dump, including Q4 GDP, Japanese inflation and Australian jobs data will be highlights.

Attention will focus first on China's fourth quarter GDP release, which is issued alongside details of industrial output and retail sales for December. While PMIs were better than expected, this was prior to the surge in COVID-19 cases, placing the emphasis on flash January PMI data in the following week. Meanwhile, the economy is expected to have slowed sharply in the final quarter of the year amid COVID-19 disruptions. Any severe weakening of production will be a cause for concern in relation to the global supply crunch.

Attention then shifts to the UK. The BoE surprised markets by hiking rates in December citing concerns over high inflation and the resilience of the job market following the end of the government's furlough scheme. Whether inflation has continued to rise, having hit a decade high of 5.1% in November, and whether jobs growth has been sustained - as indicated by recruitment surveys - will likely be key factors in determining the timing of the next rate hike.

In APAC, the Bank of Japan and Bank Negara Malaysia meet for the first time of the year. No changes to monetary policy settings expected but any comments on the potential impact of Omicron will be assessed.

After surging inflation in the US added to bets that the FOMC would hike rates three times in 2022, next week's focus shifts to the Bank of England. Having already started hiking rates back in December, upcoming data will be scoured for clues as to the pace of policy tightening in the coming year.

UK inflation has already risen to a decade high of 5.1%, and soaring utility bills look set to drive it still higher in coming months. The Bank is pencilling in 6% by April, but most economists expect the pace to starting cooling in the second half of the year. A rise in the upcoming CPI numbers will therefore be of little surprise, or influence on policymakers. Instead, it is the labour market which arguably needs to be watched more closely. The Bank's concern is that inflation expectations are rising, which could feed through to higher wage growth, meaning inflation stays uncomfortably high for longer than currently anticipated. Such concerns are fuelled by the prior release of official data showing the number of unfilled vacancies having risen to 1.2 million while unemployment was down to 1.4 million: an implied record low ratio of job seekers to vacancies, pointing to a tight labour market. 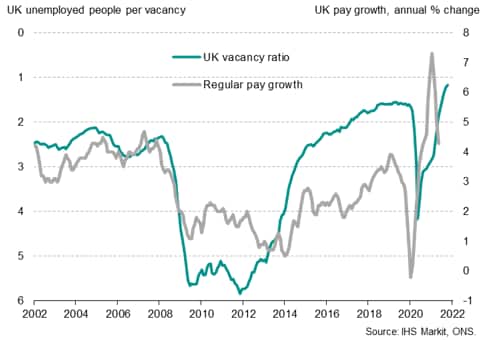 More timely recruitment industry survey data showed the availability of staff deteriorating sharply once again in the UK during December, albeit at the slowest rate for eight months, pushing pay higher at a rate only marginally shy of all-time records. What's more, Brexit and Omicron threaten to lead to further labour supply shortages, driving costs and wages up further, though both factors are also likely to stymie economic growth. The juggling act for the Bank of England is to therefore steer a suitable course for policy among these signs of persistent inflation yet weakening economic growth, with the coming week's labour market data are likely to play a key role in determining the timing of the next move.

US existing home sales and housing starts data will be released in the coming week. The tight housing market situation will be assessed with the data. Consensus estimates currently point to a figure comparable with the prior month for December existing home sales.

Canada inflation and retail sales figures will also be released with a focus on whether price pressures showed signs of abating in the final month of 2021.

UK inflation data will be due next week after the IHS Markit/CIPS UK Composite PMI showed price pressures easing in December. Meanwhile strong employment growth amid shortages of candidates were noted, hinting at another set of positive employment figures to be released in the coming week.

In the eurozone, eyes will be on the January German ZEW survey as well as flash January consumer confidence data from the eurozone. Final inflation figures from Germany and the eurozone are expected to bring little surprises, after preliminary data showed inflation in the region hitting a record 5.3%.

The focus in Asia is expected to be with China's data release, as December's industrial output and retail sales numbers are due following better than expected Caixin China General Services and Manufacturing PMI numbers. Fourth quarter GDP will also be due, with a slowdown to 2.3% from 4.9% in Q3 expected, according to IHS Markit, linked to the ongoing pandemic impact as China pursues a zero Covid policy.

Central bank meetings in Japan and Malaysia are also set to take place though no changes are expected from either in their respective first meetings of the year. Japan's CPI data will receive an update for December following November's surprises on the upside, whereby core CPI rose at the fastest pace in nearly two years.