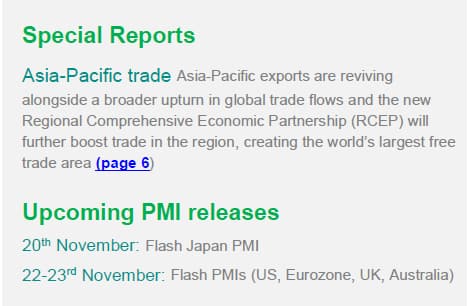 The week sees important updates to the economic picture in the US and China, with retail sales and industrial production numbers released. As both series form important components of nowcast models, the numbers will give a good steer on GDP growth rates. Retail sales in both China and the US have risen above levels of a year ago, up 2.3% and 5.4% respectively in September, but the picture has been more mixed for industry, with production surging 6.9% higher on a year ago in China but down 7.3% in the US.

Other releases in the US include housing market, inventories and jobless claims data, while Kansas, Philly Fed and the Empire State surveys give early glimpses of economic trends in November.

In Asia, other releases include flash PMIs for Japan and Australia, giving the first clues as to economic trends midway through the fourth quarter. Recent data have been encouraging: Japan saw its downturn ease in October while Australia saw its recovery gain momentum. October updates to trade in Singapore, Thailand, Indonesia and India will also be closely watched, as will GDP data for Thailand and Singapore. Monetary policy meetings are meanwhile scheduled for Thailand, Indonesia and the Philippines, though no changes are anticipated.

In Europe, consumers are under the spotlight as household sentiment data are published across the region and retail sales data are issued in the UK. With many European countries re-introducing lockdown measures to fight off second waves of COVID-19 infections, the resilience of the consumer will be a key determinant of whether fourth quarter downturns can be avoided. So far, PMI data have indicated deteriorating trends for both the UK and Eurozone. Both the UK and Eurozone also provide updates to inflation.

The week also sees the G20 summit convene in Riyadh, with expectations rising that progress will be made on a new framework for dealing with the recent rise in indebtedness of the world's poorest countries.