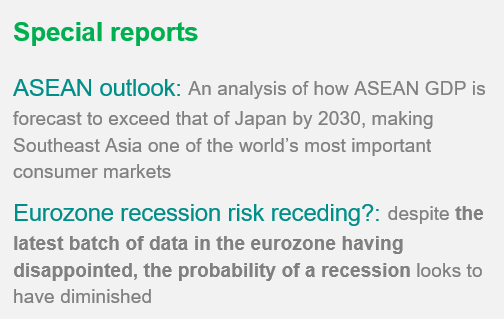 The week starts with a flurry of flash PMI updates and key official data releases for the US and China, notably including industrial production. The UK will meanwhile be also digesting the general election result, as well as a clutch of official data to feed into the last Bank of England policy decision of the month. Monetary policy meetings also take place in Japan, Taiwan, Thailand and Indonesia. The week closes with final third quarter GDP numbers for the UK and US.

UK politics move into a new chapter as the country digests the election result and implications for Brexit, but flash PMI data, labour market stats and official updates to inflation and retail sales will all be also eagerly awaited in a week in which the Bank of England sets interest rates. No change is expected, but last month saw a new split in the policy committee as two of the nine members voted for lower rates.

Eurozone PMI data will likewise be key to determining whether the single currency area can avoid recession, having slowed close to stall speed in the three months to November.

Further clues as to the US economy's performance the fourth quarter will be provided by the flash PMI surveys for manufacturing and services from IHS Markit. The November surveys showed encouraging signs of growth lifting higher, albeit remaining subdued and in line with GDP growth of around 1.5%. Official industrial production and PCE inflation numbers will also help assess if the FOMC is likely to remain happy to stay on hold.

In Asia Pacific, a slew of economic data out of China includes industrial production, retail sales and investment numbers, all of which will help determine whether more stimulus will be required. Likewise in Japan, the PMI numbers come on the heels of recently announced fiscal stimulus, but any further faltering in the economy will influence whether the Bank of Japan could also seek to unleash more firepower.