The week ahead will see an abundance of central bank meetings across the US, UK, Japan, Indonesia and Taiwan. Retail sales and industrial production data will also be due from the US and China. The UK meanwhile releases employment data for February while Japan and the eurozone issue inflation figures.

Central bankers will be making their moves to tackle inflation in the coming week starting with the US Fed, which is expected to kickstart its rate hike cycle. While a 25-basis point hike had been well-telegraphed, the path forward remains less certain amid Russia's invasion of Ukraine. The latest IHS Markit Investment Manager Index revealed that US equity investor risk appetite had slumped on the back of geopolitical and macroeconomic concerns, while many retained the view that more tightening than currently signalled may be on the way due to a protracted supply chain crisis. As such, the Fed's projections and stance will be closely studied in the coming week.

Meanwhile the BoE and CBC are expected to join the Fed in lifting policy rates in the coming week. A rate hike in March will mark the third consecutive meeting in which the UK central bank raises rates, a move to tackle inflation with January consumer price inflation now at the highest in 30 years. Taiwan CBC is likewise set to commence hiking of rates but could keep it gradual amid external uncertainties. In all cases, however, policymaker reaction to the Ukraine war remains a key element of uncertainty.

Economic forecasts of growth and inflation have been largely made redundant by the invasion of Ukraine, posing downside risks to growth while adding to inflationary pressures. Growth is invariably being affected by sanctions as well as the likely hit to business confidence from the war.

However, European supply chains are also again being disrupted adding to downside growth risks but also exacerbating inflationary pressures, the latter already hit by soaring energy prices. PMI data showed that, although some supply chain disruptions were starting to ease in February, rising energy and staff costs had pushed prices higher at a rate approaching prior record highs. Envy not, therefore, the central banks that meet in the coming week to determine the correct path for monetary policy in this environment. 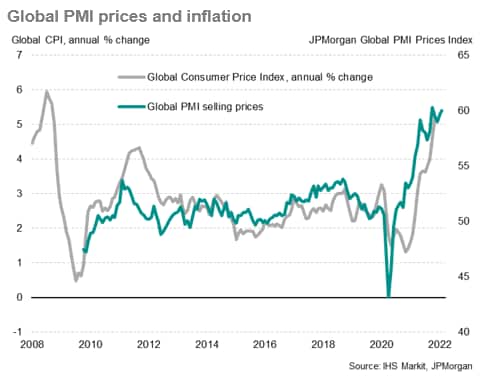 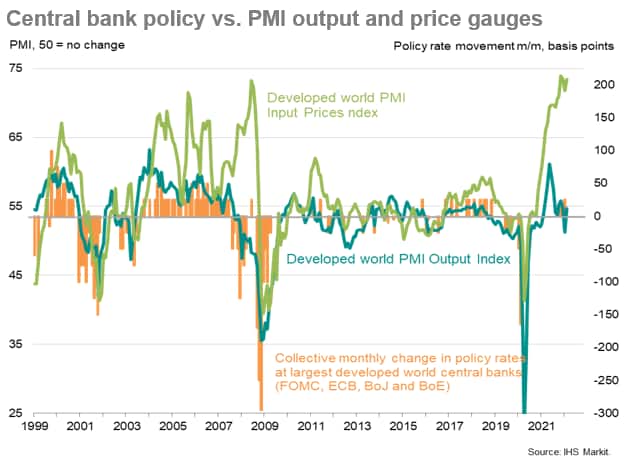 The US Federal Open Market Committee (FOMC) meeting will be held 15-16 March with the meeting statement, economic projections and Fed chair Powell's presser to follow. The Fed is widely expected to kickstart their rate hike cycle in the March meeting, commencing with a 25 basis points (bps) increase, despite the uncertainties caused by the Ukraine invasion. This had been well communicated by Fed chair Powell in his latest testimony to Congress alongside signals that the FOMC will soon announce plans for shrinking the Fed's balance sheet. The Fed's updated dot plot and views towards the balance sheet will be closely scrutinised by the market for future policy clues.

February US retail sales and industrial production figures will also be due, with growth of both expected to slow month-on-month according to consensus.

The Bank of England convenes for the second time this year and is expected to deliver their third consecutive 25 bps hike. At least one more hike is expected in 2022, likely at the May meeting. The BoE's rate hike cycle has been one aimed at taming above-target inflation with February PMI data backing the impetus, seeing solid output growth and accelerating price inflation.

APAC central banks across Japan, Indonesia and Taiwan also updates their monetary policy settings in the coming week, with the Taiwan CBC expected to commence hiking rates in the March meeting to reflect the US monetary policy tightening and higher local import costs, though keeping the path of rate increases gradual amid external uncertainties.

China's data barrage will be due Tuesday with industrial output growth set to slow according to consensus, though stabilisation had earlier been seen for China's manufacturing production in February.