The week ahead finds the focus on the January US Fed FOMC minutes, while UK and China January inflation data will be key economic figures to track. Fourth quarter GDP readings from the eurozone and Japan are also lined up while US releases retail sales, industrial production and PPI data through the week.

US equity investors remain risk averse according to our latest February IHS Markit Investment Manager Index™ (IMI™), concerned with the macro environment and policy tightening at a time of escalating geopolitical tensions. Next week's Fed minutes will therefore be scoured for further insights on the Fed's path post the expected March rate hike. As far as January's survey data suggested, the US continues to experience strong price increases, but the global economy could see inflation pressures persist as growth slows, highlighting the possibility that central bankers could be hiking into a slowdown. US housing market, retail sales and industrial production will therefore be keenly eyed for clues as to the US growth trajectory.

Policymakers in the UK are meanwhile divided as to how aggressively to tighten policy, and a batch of statistics ranging from inflation to the labour market and retail sales will add to the UK policy debate.

Meanwhile, ahead of the Winter Olympics in January China had seen the Omicron wave disrupting manufacturing sector operations. Manufacturing output fell, though price pressures eased in tandem, pointing to lowered producer prices readings in the upcoming release this week.

Gauging the Omicron impact in the US

Two key releases in the coming week will be industrial production and retail sales for the US, which will provide insights into economic trends and GDP growth in the first quarter so far. The official data follow IHS Markit and ISM survey gauges showing the US economy being hit by the surge in COVID-19 cases linked to the Omicron variant in January. However, the two surveys give markedly different pictures of the extent of the hit, with the ISM survey indicating a far less marked slowing than the IHS Markit index. The former has tended to overstate manufacturing performance in recent years, suggesting the IHS Markit index is providing a more accurate picture of a factory sector that is reeling under the disruptions caused by the latest virus wave.

Read more about the latest signals here with a more in-depth analysis of how the ISM and IHS Markit surveys compare here .

US GDP and the IHS Markit PMI (manufacturing & services) 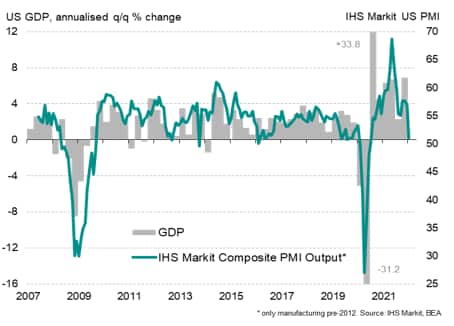 US manufacturing vs. IHS Markit PMI and ISM surveys 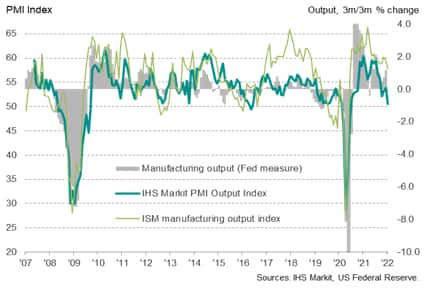 *Press releases of indices produced by IHS Markit and relevant sponsors can be foundhere.

January's Federal Open Market Committee (FOMC) minutes will be scrutinised for details of the Fed's tightening path. A hawkish tone adopted by Fed chair Jerome Powell in his press conference coupled with recent comments from Fed members have led to heightened speculation of a 50-basis point hike in March, which will be steeper than earlier expected. Any further suggestions of the likelihood will be key, although IHS Markit continues to forecast only a 25-basis point hike for the March FOMC meeting.

Meanwhile January retail sales, industrial production and PPI data will also be released in the coming week, ones to watch after survey gauges indicated that the US manufacturing sector and services have been affected by the Omicron variant's disruptions.

The new estimate for Q4 GDP from the eurozone will be in focus next week with the consensus pointing to sluggish 0.3% quarterly growth.

Meanwhile with IHS Markit/CIPS UK PMI data for January showing services selling prices inflation at a survey-record high, the official UK CPI update is likely to rise from the current 5.4% annual rate and add to the odds of a further imminent Bank of England rate hike. UK retail sales and labour market data are also released to add further to the policy debate among an MPC which is split on how quickly to raise interest rates.

CPI and PPI figures will also be due from China in the coming week for a month where the manufacturing powerhouse saw output fall into decline amid the Omicron wave. In turn, price pressures in the manufacturing sector eased, which is in line with the consensus view for PPI to fall to 9.4% from 10.3% previously, in part reflecting government intervention.

Japan Q4 GDP will be due on Tuesday with the consensus pointing to a rebound to 1.4% growth following the third quarter's -0.9% print.