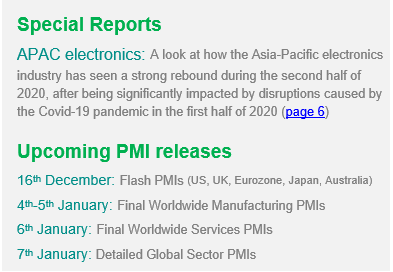 The coming week sees policy meetings at no fewer than ten central banks, including the FOMC, plus a wealth of data releases which will help steer views on current economic growth, employment and inflation trajectories.

Central banks line up to set policy in the US, Japan and UK, as well as in Russia, Switzerland, Norway, the Czech Republic, the Philippines, Indonesia and Mexico. Policymakers will be seeking to balance a brightening economic outlook following the development of Covid-19 vaccines, which have raised prospects of life moving closer to normal over the course of 2021, against signs of further long-lasting damage from the pandemic. While rising price pressures will be largely 'looked through', markets will also be eager to asses just how much inflationary pressure is judged to be in the pipeline.

The problems facing policymakers are encapsulated in recent PMI data, flash numbers for which are updated during the week. The November PMIs showed the global economic recovery losing momentum as further waves of Covid-19 hit many countries, but prospects for the year ahead surged to the highest for over six years, mainly reflecting vaccine hopes. Supply delays were meanwhile cited as having pushed goods prices higher at a rate not seen for two years.

In the US, the FOMC meets for the first time since the Presidential elections and the encouraging news on vaccine roll outs, though the outlook remains clouded by uncertainty over the pandemic stimulus. Clarity is also needed on whether the economy has been hit again by rising Covid-19 infection rates, meaning the flash PMIs will be closely watched as the first indicators of national economic trends in December.

In the UK, the PMI data will give an insight into whether growth has been regained after November's lockdowns, accompanied by official labour market and retail sales numbers. The data carry additional weight ahead of the MPC meeting, which comes alongside mixed views among policymakers on the resilience of the economy.

Flash Eurozone PMIs will meanwhile give added insight into how severe a fourth quarter downturn might be, given the additional measures implemented to fight the pandemic in recent weeks. The strength of Germany's manufacturing sector, which has shown encouraging buoyancy, will be under particular scrutiny.

In Asia, China's economy is in focus with key official data such as industrial production and retail sales updated. The releases follow news from the Caixin PMI that business activity grew in China during November at the fastest rate for over ten years. Japan, in contrast, is seeing a far more muted economic recovery, according to the PMI, for which December flash data will be updated during the week.