Fed FOMC, BoE, BoJ meetings, US and China May data

Central bank meetings will be in focus in the coming week with the US Fed, the Bank of England and Bank of Japan all due to update their monetary policy decisions in the coming week. In the data docket, US retail sales, industrial production and PPI data will be watched midway into the second quarter. Likewise in China, where retail sales and industrial output figures will be released. In the UK, April GDP data and the monthly labour market report will be eagerly awaited.

Following the US CPI data release this week, the Fed's FOMC meeting will be the highlight in the coming week. Market sentiment remains weak at present amid concerns over stubborn inflation and the impact of high prices on growth, with recent US PMI data pointing to slowing business activity amid rising prices and softer demand. While a 50 basis point hike appears to be the forgone conclusion at this point according to the CME FedWatch tool, the Fed's rhetoric and projection will be eagerly followed for indications on the path forward and the resultant impact that will play into growth forecasts.

Meanwhile the UK, faced with slowing growth according to the S&P Global / CIPS UK PMI, may see the Bank of England take a more cautious 25 basis point hike amid fears of tipping the economy into recession. For the Bank of Japan, despite USD/JPY hitting a two-decade high, driven by yield differentials, any lifting of interest rates is not expected. Japan had also only recently seen growth catching up towards other developed world economies, after virus restrictions were gradually eased.

A busy week of economic releases also brings retail sales and industrial production data from the US and China, two countries running at differing speeds in May. While some slowdown in the US may be the case amid cost pressures, a slower deterioration of conditions had been seen for mainland China in May's PMI surveys which, if supported by the official data, could see inventor focus shift more positively towards China, and also anticipate some easing of global supply constraints.

Policy announcements are due in the coming week from the US FOMC and the Bank of England. A 50 basis point hike is penciled in for the FOMC as policymakers seek to rein-in inflation at a time of still-robust business activity grow. In the UK, the policy decision is less clear-cut. While inflation is likewise at a multi-decade high, UK growth is faltering, meaning there's a greater risk that tighter policy could spark a recession in the UK compared to the US. 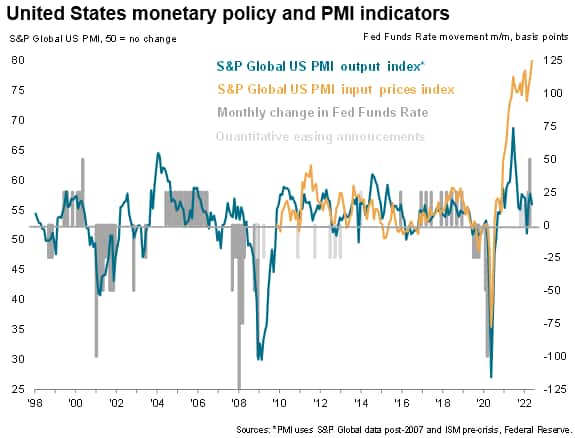 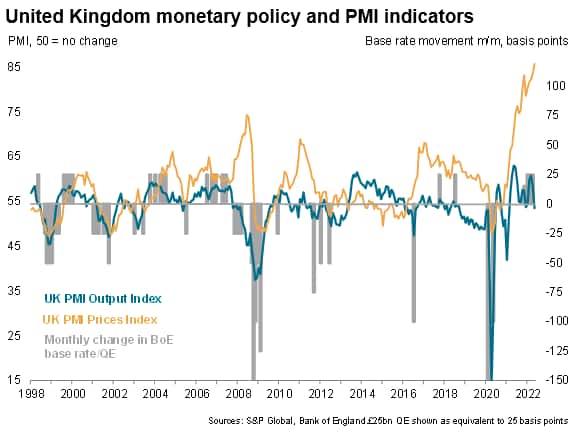 The June Fed FOMC meeting unfolds with the Fed's policy decision, post-meeting statement and projections all due Wednesday. A 50 basis point hike is widely expected and has been supported by recent Fed officials' rhetoric. This is against the backdrop of elevated US inflation in April with the latest S&P Global US Composite PMI data likewise pointing to further rapid price gains in May.

Growth figures will be in focus after Fed chair Jerome Powell commented in May that the central bank wants to see economic growth slowing in the attempt to tame inflation. US data of interest in this respect includes retail sales and industrial production as well as housing market data.

The Bank of England also convenes in the coming week and markets are fully pricing-in a 25 basis point rise in June with further hikes expected drive rates up to 2.5% from the current 1% by the end of the year. However, UK recession risks have risen, adding uncertainty to the rate path as weaker growth will help to tame inflation. This also comes after private sector output growth slowed for a second month running in May, according to the S&P Global / CIPS UK PMI data. Fresh UK GDP data for April and a full round-up of labour market data, including wage growth, will therefore be important to watch for any signs of growth faltering and second-round inflation effects.

The Bank of Japan also updates their monetary policy decision. With the BoJ sticking to keeping interest rates low while developed world central banks, including the Fed, tightens monetary policy, currency fluctuations had been in focus. How the BoJ positions themselves in such an environment will be in focus.

Other key data due includes China's May retail sales and industrial output figures after PMI data showed improvements in readings, albeit in contraction territory.