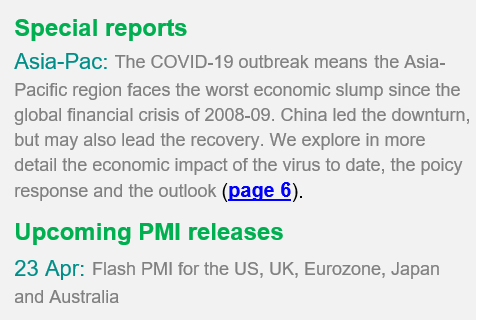 The coming week sees the release of some eagerly awaited official data which will indicate how some of the world's key economies have fared in the face of the COVID-19 outbreak during March. Early data such as initial jobless claims in the US and UK have looked like spreadsheet errors, spiking higher as the pandemic led to lockdowns and business closures. Similarly, the March PMI data showed global business contracting at the steepest rate since 2009 as efforts to contain the virus caused activity to collapse across huge swathes of the economy, often to unprecedented degrees in areas such as travel and tourism.

Some of the most important releases will come out of China, notably industrial production, retail sales, investment and trade for March. With China having locked down before other countries, these numbers will help gain some sense of the extent to which China's economy and its supply chains have managed to recover after a marked drop in activity in February, as virus containment measures start to ease. China's first quarter GDP is also released, but will be more backward-looking than the monthly data. Other trade numbers for Asia, notably for Japan, India and Indonesia will also be updated for March.

In the US, we also await industrial production and retail sales numbers for March, as well as housing starts, in addition to the weekly jobless statistics. We can expect to see some very weak figures after our PMI surveys showed the steepest downturn in the US economy since 2009. Some regional Fed surveys are also released which will give an initial insight into manufacturing trends in early April.

The UK sees non-official retail sales numbers for March and the Bank of England releases its first quarter credit conditions survey. Final inflation and industrial production numbers for the euro area are due, but the latter only relate to February.

The week also sees the IMF release new global economic forecasts, which are likely to show significant downgrades. IHS Markit forecasts are available here, and project a 2.6% drop in global GDP in 2020. 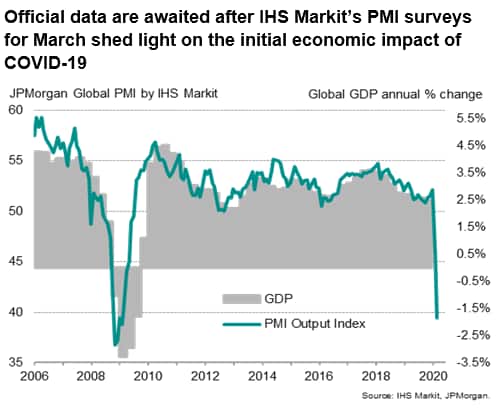