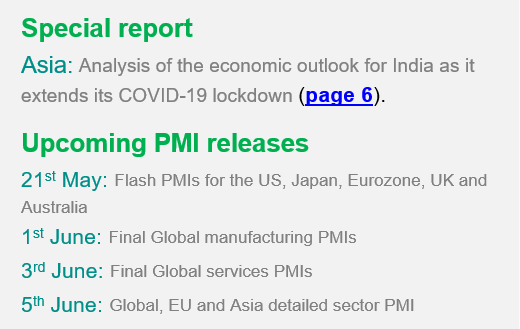 The week ahead sees some key retail sales and industrial output numbers released, which will provide important signals as to just how steeply economies may collapse in the second quarter. Given that the PMI surveys for April showed the global economy contracting at an unprecedented rate, with manufacturing slumping at a pace not seen for 11 years, we are anticipating some gloomy news.

After US retail sales and industrial production fell at post-war record rates in March, the updates for April could make for especially grim reading. Survey data suggest the economy took a further significant lurch downwards at the start of the second quarter as measures taken to contain the COVID-19 outbreak intensified. Lockdowns, non-essential business closures and social distancing hit business activity and demand. We are expecting US GDP to fall at a quarterly rate approaching double digits. Inflation data are also released and likely to show easing price pressures.

China also releases industrial production and retail sales data alongside a slew of other indicators including investment. With China having started to re-open its economy from COVID-19 lockdowns sooner than other countries, these numbers could provide important clues as to how quickly production and consumer spending might rebound. Asia also sees first quarter GDP data released for Japan, Malaysia and Hong Kong SAR. Policy action meanwhile comes from the central bank of New Zealand.

In Europe, first quarter GDP data for the UK, Germany, Poland, the Czech Republic, Hungary and the Netherlands are published, all of which will be eagerly awaited to gain further insight into the extent to which the pandemic caused economic activity to slump as lockdowns were implemented. Eurozone industrial production numbers for April will meanwhile give the first major official data insight into how sharply the economy might collapse in the second quarter. Based on the record low seen for eurozone PMI numbers, we expect to see an unprecedented downturn.