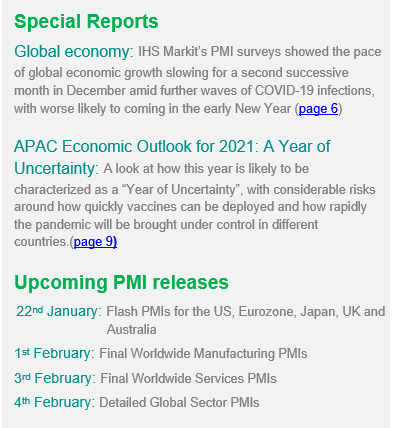 With COVID-19 infections rising sharply in many countries, the focus will be on the path of the virus and extent to which economies will have to be locked down in the first quarter, as well naturally as the policy response, notably in the US. However, the week ahead also sees some important economic data releases which will give further clues as to the extent to which various major economies managed to continue to recover in the fourth quarter.

Leading the bill is fourth quarter GDP for China which, with just around 100,000 virus cases and 5,000 deaths reported in total, has seen life return almost to normal, boosting economic activity according to the PMI surveys. Hence the fourth quarter is expected to have seen China's GDP growth accelerate from 4.8% in the third quarter to approximately 6.5%. Of particular interest will be the accompanying higher frequency data on industrial production and retail sales, as these will give details of growth momentum both among manufacturers and consumers in December.

Similarly in the US, where tensions could build again in the lead up to the Presidential inauguration on 20th January, industrial production and retail sales data will provide important steers on fourth quarter economic growth nowcasts, albeit only up to November. The University of Michigan Consumer sentiment survey will add some more timely insight into how the pandemic and political environment have affected sentiment in January. Jobless claims and job openings data will meanwhile help clarify the latest labour market trends, and we also see updates to the NFIB survey and the Beige Book.

In Europe, Brexit-watchers will be further assessing the impact of the end of the UK's transition period, the lead up to which is likely to have provided a temporary boost to November's GDP numbers, which are released on Friday. The Eurozone also sees updated industrial production data, which surveys hint at showing robust growth, albeit dependent to a large extent on Germany.