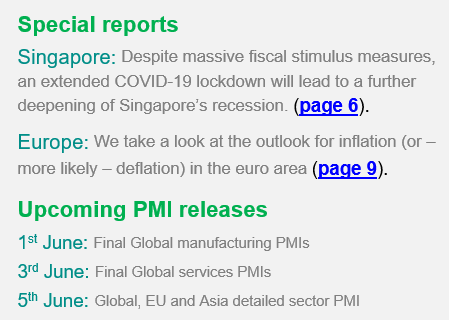 The week ahead sees the PMI business surveys provide the first major insights into global economic trends in May, with clues being sought as to not only the depth of the downturn but also the speed with which economies can recover from the COVID-19 pandemic. Other key events include US non-farm payrolls and monetary policy meetings at the ECB, Bank of Canada and RBA.

Provisional PMI data hint that the global downturn may have already peaked back in April, with rates of decline having eased markedly in the US, Eurozone, Japan and UK in May. If lockdowns are lifted further in coming months, as planned, a return to growth looks possible for many economies as we head into the third quarter. With markets showing signs of reduced pessimism on the economic outlook, analysts will therefore be hoping that the final global PMIs will confirm an easing from April's unprecedented rate of economic contraction. China's PMI data will prove especially interesting as a bellwether for other economies, as China has relaxed many of its COVID-19 restrictions earlier than other countries.

In the US, the IHS Markit PMI and ISM surveys are followed by the monthly employment report, which is expected to show further widespread job losses and another increase in the unemployment rate beyond the current post-war record of 14.7%. Other key US releases include factory orders and trade data.

In Europe, the PMI releases are swiftly followed by the ECB's Governing Council meeting, for which we see a high likelihood of further stimulus being announced. Euro area unemployment and retail sales data are also updated, as are UK mortgage approvals.

In Asia, Caixin and NBS PMI releases are joined by Japan, South Korea and Australia updating their GDP numbers, with the latter also setting monetary policy, for which further easing is anticipated. Other highlights include Hong Kong SAR retail sales, trade figures in Australia, China, South Korea and Malaysia, plus inflation data in Thailand, Taiwan, the Philippines and Indonesia.