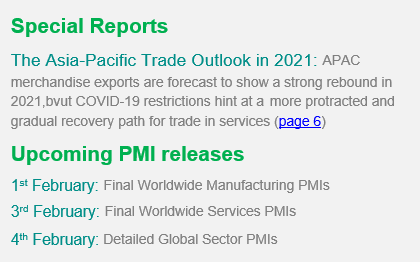 A full economic calendar for the week kicks off with worldwide PMI surveys and closes with the monthly US nonfarm payroll report. Sandwiched between are policy decisions from three of the world's major central banks.

The PMI surveys will be closely watched, having shown escalating risks of double dip recessions in the eurozone and UK as tightening COVID-19 restrictions constrain economies again, albeit to markedly lesser extents than in early 2020. Global growth has shown encouraging resilience though, thanks to sustained strong expansions in many other economies, notably including the US and China. The weak spot remains consumer services, and in particular cross-border services, such as travel and tourism ( a full overview of the December PMIs is available here).

For the US, economic insights into the performance of the economy from the IHS Markit and ISM manufacturing and services PMIs are accompanied by the official labour market data. Analysts are anticipating a renewed rise in nonfarm payrolls after the slide into decline recorded in December, but the jobs numbers are expected to remain subdued compared to prior months in the recovery.

In Europe, the Bank of England is expected to follow in the footsteps of the FOMC, stressing the need to policy to remain accommodative long into the future as the pandemic poses ongoing risks. In the UK, Brexit disruptions have added to the country's third lockdown woes, driving output sharply lower in January.

Similarly in Asia, the reserve banks of India and Australia are likely to lean towards dovish stances. Although both economies have shown strong rebounds since the initial impact of the pandemic, policymakers remain worried about the potential for renewed weakness amid further waves of the virus either at home or abroad. Supply delays have also muddied the water for policymakers somewhat, meaning recent PMI data will also be eyed for indications that supply constraints and associated spike in prices for many goods will have started to ease.